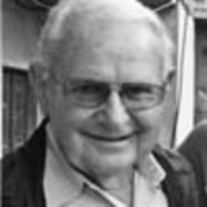 Albert Lienert, 89, of Nicolaus, California, died at home on Saturday, January 15, 2022. He enjoyed more than 75 years of good health and then gave Parkinson's a run for its money. Albert was born at home on October 5, 1932, in Nicolaus, CA, the youngest of four children. Some say he was born with a shovel in his hand. His work alongside his father, Albert and mother, Angelina, milking cows and taking care of the family dairy farm continued on after high school. He met his wife, Shirley (Bazant), at an Octoberfest. They married in August of 1969, and built a home on the farm, where they raised their two children, Julie and Jeff. Albert spent his entire life working honorably with his hands. After the dairy was converted to crop farming, he began working for Engasser Oil and then Buljan Oil delivering fuel to local farmers. And when he wasn't working for someone else, he worked by hand with a shovel in his large beloved garden. He was an active member of the Order of Hermann Sons' Sutter Lodge #36 for over 75 years. And he was a faithful parishioner of St. Boniface Church all his life, until he was unable to make it to his seat in the back of the church. He was a devoted family man and loving husband, with great pride in his children and grandchildren. Among his greatest joys, Albert delighted in dressing with style, dancing, musical theater or any live performance, traveling to all 50 states and beyond, mixing you a drink, and hiding Easter Eggs. To know Albert was to know kindness. He is survived by his wife of 52 years, Shirley (Bazant) Lienert; daughter, Julie Lienert (spouse Alice Ducey) of Richmond, CA; son, Jeff Lienert (girlfriend, Tracy Bartlett, and daughters Chloe and Camryn) of El Dorado Hills, CA; sister, Elizabeth (Lienert) Gianella; and niece, Martha Blattman (husband, Robert DeValentine and great-nephew, Robert DeValentine). Albert is preceded in death by his parents, Albert and Angelina; and his sisters, Alberta (Lienert) and Rose Blattman. A funeral service will be held at 1:00 p.m. Saturday, Jan. 29, 2022, at St. Boniface Church in Nicolaus, followed by a reception at 3:00 p.m. at 2121 Ranch, 2121 Carley Rd., Nicolaus, CA. Please dress warm. ~In lieu of flowers, donations can be made to The Parkinson's Foundation www.parkinson.org or to the South Sutter Recreation Association www.ssrapool.com, 2408 Palm St., Nicolaus, CA 95659.

Albert Lienert, 89, of Nicolaus, California, died at home on Saturday, January 15, 2022. He enjoyed more than 75 years of good health and then gave Parkinson's a run for its money. Albert was born at home on October 5, 1932, in Nicolaus, CA,... View Obituary & Service Information

The family of Albert Lienert created this Life Tributes page to make it easy to share your memories.

Albert Lienert, 89, of Nicolaus, California, died at home on...

Send flowers to the Lienert family.