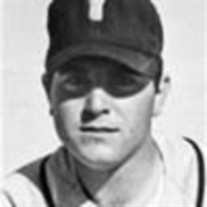 September 20, 1940 - July 21, 2021 Alexander James Pappas, whose life was dedicated in earnest to work, coaching, and fiercely and unconditionally supporting his family and friends, peacefully passed away Wednesday, July 21, 2021, at home in Yuba City, CA, surrounded by loved ones. Alex was a force of nature, whose character and strength was a profound North Star in the lives of the countless family members, colleagues, friends, athletes and students he cherished and served over his eight decades of life in the Yuba-Sutter area. The love he gave and received is endless. Born September 20, 1940, in San Francisco to Costandinos (Gus) and Andriana Pappas, Alex was the oldest of six children and de facto leader of a boisterous Greek clan who followed his example by showing steadfast support for one another, remaining closely bonded to this day. He attended Yuba City High School, where he excelled as a star catcher on the varsity baseball team, sparking a lifelong passion for baseball and coaching high school sports. In 2014, he was inducted into the YCHS Baseball Hall of Fame, a great honor in his life. Alex took a summer job in agriculture at 17, going on to work at least 60 peach harvests as a grader and supervisor with the Department of Agriculture, and meeting two great loves who changed the course of his life. He missed just three seasons, 1959-1961, when he served as a Private First Class in the U.S. Army - a stint that took him to Europe and opened up his world to the sights, people, cuisines and beers of other cultures, and provided ample fodder for many stories of adventures he shared, always with a delighted grin. He returned to play baseball for Yuba College, and met Linda Orlando one warm summer day while working together at a peach grading station, surrounded by sorting boxes. He famously proposed on their first date. During their earliest years of marriage, they finished their undergraduate education together at the University of California, Chico, where Alex earned a degree in Psychology. He went on to forge a 32-year career at Marysville High School, where he taught special education, home economics and coached football and baseball, motivating players and students to pursue their highest potential. Alex and Linda raised four sons, Matthew, Vincent, Stephen and Michael Pappas, in whom he instilled a strong sense of sportsmanship, work ethic and outstanding cooking and baking skills. The grandchildren they gave him were the light of his life, and kept him smiling until his final day. Alex was an avid collector - spending decades on a quest to rebuild a beloved collection of records and baseball cards lost when he was stationed abroad. Each summer he grew bushels of Ace tomatoes, which by his estimation was the perfect varietal. Each Christmas, he baked and delivered dozens of plates of baklava, kourabiedes and melomakarona to friends and family who looked forward to his visit every year. He was preceded in death by his parents; wife, Linda Pappas; nephew, John Janis; and brother-in-law, Tom Orlando. He is survived by his second wife, Donna; sons and daughters-in-law, Adriana, Angie and Megan; grandchildren, Alex, Isabella, Rosalind and Milos; siblings, Ann Janis, Connie Botteron and George, Paul, and Jim Pappas; siblings-in-law, John and David Orlando, and Maria Anderson; and a multitude of nieces, nephews, cousins and others he welcomed into his home as family. A celebration of Alex's life will be held at 9 a.m., August 21, 2021, at Weldon Field at Marysville High School. In lieu of flowers, please consider a donation to St. Jude Children's Research Hospital or the American Cancer Society.

September 20, 1940 - July 21, 2021 Alexander James Pappas, whose life was dedicated in earnest to work, coaching, and fiercely and unconditionally supporting his family and friends, peacefully passed away Wednesday, July 21, 2021, at home in... View Obituary & Service Information

The family of Alexander James Pappas created this Life Tributes page to make it easy to share your memories.

Send flowers to the Pappas family.