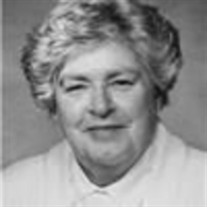 Alice Margaret (England) Smith died peacefully on January 8th, 2022, in Marysville, CA, just short of her 95th birthday. Born February 19, 1927, In Oroville, CA, to Ewin G. and Faith F. (Dufur) England, Alice was raised in Durham, CA, where her father was an elementary teacher and school principal. As a child, she took piano lessons and later played the bass in the Chico Symphony at her father's behest. She had one younger brother, David (Brick) England, who preceded her in death and who loved to pester her, even as an adult. She was a gifted stenographer and typist, a skill she said came easily because of her dexterity on the piano. She had many friends in Durham. She loved the Sierra Nevadas, especially Gold Lake, where she spent her summers while her father ran the YMCA camp. After Alice graduated from high school during World War II, she went to work in the war effort at Mather Field, in Sacramento. Later, she worked as an operator routing international calls for the military. After the war, she attended the College of the Pacific in Stockton. She majored in psychology, also studying music, but left college when she married, much to her father's dismay. She was the youngest organist for their chapel at the time. She frequently was an organist in Church and a gifted accompanist on the piano. Her daughters remember she rarely sat with them in Church. She met her husband, Austin Jack Smith, a native of Stockton, and recently returned from the war, while attending college. Alice's roommate, Bonnie, and Jack's best friend, Bill, met at the same time as Jack and Alice - on a levee in Stockton. Both couples were soon married. Alice and Jack's wedding was on May 11, 1947. Shortly after she married, Alice's mother died, a loss she felt throughout her life. While Jack continued his career in the Navy, and later the Air Force, the couple lived in Hawaii, Castle AFB, near Merced, CA, Offutt AFB, near Omaha, NE, High Wycombe AFB, England, then finally in Sutter, CA, where Jack finished his career in the Air Force at Beale AFB. Alice and their growing family moved with him to each of these areas, and she loved the adventure of each new place. Jack and Alice had four daughters, Elizabeth (Beth) Gardner, deceased, (David), Dorothy Richins (Ken), Charlotte McDonald (Dale) and Candice Sawyer (John), and a foster daughter, Ann Gray Rethard (Tom, deceased). Alice held various jobs throughout her life. She worked as a dental assistant, school secretary, preschool teacher, substitute teacher, at Sunsweet during harvest season, piano teacher, and a route driver. She loved writing and photography, and worked for a short time as a reporter for the Independent Herald. She sang with the Sweet Adelines. She also loved gardening, especially working with roses. However, no job was more important or gave her more pleasure than that of being a mother. Jack and Alice were blessed with 38 grandchildren and a host of great-grandchildren who will miss her greatly. She was an example of dedication to children and family through thick and thin. While in Stockton, as new parents, Alice and Jack heard about and then later joined the Church of Jesus Christ of Latter-day Saints. Alice always loved her extended family and was very involved in genealogy. She kept in contact with cousins and was able to "find" countless relatives through her research. She loved serving as an organist, choir accompanist, and in various other callings in the Church. Her testimony is that "we are all loved, and it's terribly important that we love others and everything around us". (Written testimony, Family Search, accessed January 9, 2022) The family would like to thank Freedom Hospice and Prestige Assisted Living for their support of our mother during her later life and especially during COVID. There are truly angels among us. We would also like to thank her granddaughters, Colleen Richins Speer and Susan Richins Ence, who were with Alice during her final moments in this life. We know she is being met with jubilation by her parents, husband, daughter, brother, grandchildren, a great-grandchild, and many that have waited to see her again. The family will have a Memorial Service for Alice on April 16, 2022, when, we hope, it is safer to travel and gather.

The family of Alice Margaret (England) Smith created this Life Tributes page to make it easy to share your memories.

Send flowers to the Smith family.