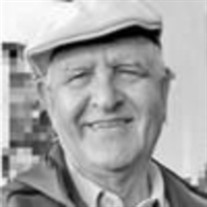 These written words will fall short of who my father was, and always will be in our hearts. My father was incomparable, a giant amongst his generation and his loss for those of us who honor him is incalculable. Even as we are now mired in the depths of anguish and the need to understand, we will find pathways to remember and meaningfully celebrate him as he most lovingly deserved. So it is with heavy hearts and great sorrow that I announce the passing of my beautiful, gentle father, Amrik Singh Gosal, on June 4th, 2021. "Mr. Gosal" or "uncle" - as he was apt to be called by so many as a term of endearment and respect, was born in the village of Ratainda, Punjab. As a child, he loved the simplicity of village life, the value of communal family living, he treasured his relationships with his sibling and elders, and believed in word and deed, the core tenets of the Sikh faith on which he built his moral foundation. As a teenager, he made the trip from India to Yuba City to begin his 60 years of honest work and to take ownership of his share of the American Dream. He married our mother, Surjit Kaur Gosal, in the winter of 1964 and they soon welcomed three children into the home they built. Our childhood home was built on a foundation of love, honesty, and focused regard on being ethical in all things. In time, my parents added to their extended family by helping others transition to America, supporting them, and assisting them on their lifelong journeys towards the promise of a better life. During these years, he worked as a long-haul truck driver, a farmworker, and eventually, he spent the last three decades working as an owner, operator of Sutter Cab 20. In his work-life, he found a place to forge relationships, learn about the world, laugh often, and more importantly, be the one who would listen to others intently and without judgment. Each fare offered a short window into someone's life, to learn or share a kind word and he took full advantage. Until a few years ago, he would still visit the owner of one of the first farms he worked to commiserate about changes in the seasons of farming and the changes in their lives. And so it was with his coworkers at the Sacramento Airport, he enjoyed a sense of common purpose and brotherhood as change continued to happen around him. Even as he thought of what retirement would mean, he said he would still go periodically to sit and chat with the other drivers, to hear about their fares and their lives, to offer his thought and guidance, and above all to share laughs. My father loved to watch westerns and police dramas, the songs of Mohamed Rafi, and Mukesh were a constant in our home, as was his desire to always take in another hour of the nighttime melodrama that is wrestling while laughing at the absurdity of it. He loved children and their sense of honesty and fairness, and their willingness to trust. His six grandkids knew their grandfather loved them, they knew he would show up if asked, and they should know that he believed in them and was proud of them. No one could give a hug like my dad, his hug let you know that you were protected, loved, and never overlooked. His hugs always came with a light pat on the head, a blessing to let you know he truly cared. He was intellectually one of the brightest people I have known, and with fair opportunity could have done or become anything. With the limited opportunity he had, he exceeded every standard and measurement. He often had a twinkle in his eye, much like many of his generation who have lived through truly difficult circumstances, it reflected his belief that things can always get better if you didn't give up; he never gave up. In the last decade, he had dedicated himself to spending more time with his grandchildren who he adored, and for whom he wanted only the best. When asked how he was feeling or doing, his response was always to smile and say "good, good". He loved to laugh, tell stories of what he had learned, ask about what others knew, eat toasted almond ice cream, and always found time to make sure those around him felt included. Dad looked at the worth of a person by how they treated others and how they behaved when they thought no one is watching. He leaves behind an unreconcilable void in the lives of family and friends who expected to share many more years with him. He will be missed but never forgotten, his legacy will always be treasured by those who had the honor to know him. We will mourn him while we hold close the memories of everything he willingly gave us. Beloved son, sibling, husband, father, uncle, and grandfather, in our Memorial services will be held at Ullrey Memorial Chapel in Yuba City, at 10:00 am on Saturday, June 12th, 2021. Prayer and services will immediately follow at Sri Guru Nanak Sikh Temple on Bogue Road in Yuba City.

These written words will fall short of who my father was, and always will be in our hearts. My father was incomparable, a giant amongst his generation and his loss for those of us who honor him is incalculable. Even as we are now mired in the... View Obituary & Service Information

The family of Amrik Singh Gosal created this Life Tributes page to make it easy to share your memories.

These written words will fall short of who my father was, and...

Send flowers to the Gosal family.