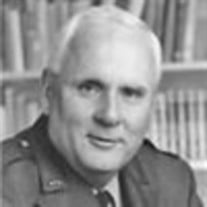 Retired Sutter County Sheriff Art Brandwood passed away peacefully surrounded by his loving family on May 23rd 2020. Arthur Raymond Brandwood was born to Raymond Cecil and Estelle Brandwood in Miami, Florida, on September 21, 1938. Art was raised in Miami. where he attended school and graduated from Miami Jackson High School. Art started his law enforcement career in 1960, when he joined the Metro Dade Sheriff's Department. During this time Art had a daughter, Debbie, who was born in 1959. Art met and married the love of his life, Cheryl on October 24th, 1964. Art and Cheryl moved to Oakland, CA, in 1965 where Art took a job with the Oakland Police Department. Art excelled in his career with OPD and worked numerous assignments including Vice, Narcotics, Patrol and Juvenile Narcotics. Art was promoted to Sergeant with OPD on February 5th, 1969. It was in his role as a Patrol Sergeant in Oakland where Art found his true calling as a leader, mentor and witness for the lord to numerous young Oakland Police Officers and citizens whom he interacted with. Art and Cheryl welcomed two sons, the first, Art Jr., born in 1967, and the second, Randy, born in 1970. Art suffered a horrific tragedy in 1972, when he lost his 13 year old daughter Debbie in a traffic accident. Art was able to endure this tragedy with the love of his wife Cheryl and his devout faith in the Lord. Art remained at OPD until 1980 when he decided to make a change and accepted a position as a Lieutenant and then Captain with the Yuba City Police Department. Art quickly made lifelong friends and established himself as a dedicated public servant and pillar of his new community in Yuba City. While working at Yuba City PD Art enrolled in the University of San Francisco and obtained his BA in Public Administration, graduating with honors. Art ran for the position of Sutter County Sheriff in 1989, and against long odds was elected to the position and was sworn into office in 1990. Art again established new relationships and made a huge impact on the men and women of the Sheriff's Office as well as those he served in the community. Art retired as the Sutter County Sheriff in 1998 after serving two terms. Art continued to volunteer for many positions and roles within the California law enforcement community including holding a critical role with the California Police Memorial Foundation. In retirement Art was called again to bear witness to the men and women of the Yuba City Police Department in 2005 and was sworn in as the Police Chaplain. It was this position where Art was able to connect with a new generation of police officers and share his faith with countless officers and citizens in the community. Art retired as Chaplain in 2013 in order to enjoy his retirement with his wife and grandkids. Art enjoyed life to the fullest, most notably duck hunting with his grandson, and his beloved dogs, Susie and Luke. Art and Cheryl enjoyed traveling with their many friends. Art is preceded in death by his daughter, Debbie; his mother and father. Art leaves behind his loving wife, Cheryl; his two sons, Randy and Art, Jr.; his four grandkids, Kayla (a current Oakland Police Officer), Ashley, Sonny and Sage; two daughters-in-law, Winter and Charlotte; and countless friends and people whose lives he had a positive impact on. In life or death Art loved his family and his Lord Jesus. Just before his passing, unable to speak he spelled out "No Fear". There will be a public viewing on Monday, June 1, 2020, between 4 and 6 pm, at Ullrey Memorial Chapel, 817 Almond St, Yuba City, CA. Please respect social distancing. A private service will be held on Tuesday, June 2, 2020. A celebration of life will be scheduled for a later date. In lieu of flowers the family asks that donations be made to the California Police Memorial Foundation at camemorial.org

The family of Art Brandwood created this Life Tributes page to make it easy to share your memories.

Send flowers to the Brandwood family.