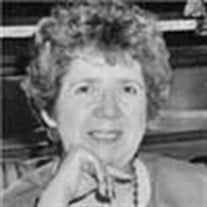 Aurora passed away on January 14, 2020. Born April 22, 1933, in San Antonio, Texas, the daughter of Juan and Concepcion Perales. She met her future husband, Lawrence Miles, an Air Force recruit undergoing basic training at Lackland AFB, when he allegedly rammed her with his bumper car at a local amusement park. He proposed a few weeks later on the Riverwalk. They traveled the world together for the next 26 years, creating a family of four boys, until Lawrence passed in 1980. She found a second love with her marriage to James "Lafe" Harris in 2006, untill Lafe passed in 2015. She had a wonderful 50+ year career as a nurse, including her service as an ER nurse at Marysville's Rideout Hospital for several decades. She inspired in her sons and others a sense of public service by her many civic contributions, which included flying to Baja for over 10 years as a volunteer nurse with the Flying Samaritans and volunteering for the Aerospace Museum of California. Aurora is survived by her brothers, John and Robert Perales (Anamaria); and her sister, Lydia Rodriguez (d-Alex), with brothers, Ernest (d-Anne Marie) and Alfonso Perales pre-deceasing her; four sons, Larry (Marsha Bedwell), Steve (Sue), Glenn (Juan Toro), and John Miles (Karen); seven grandchildren, Jonathan Miles (Stephanie Hoehn), Katherine Miles Johnston (Mark), Paul (Jenna Kline), Samantha, Lauren, Alexandria, Nicole, and Mary Aurora Miles; step-granddaughter Sofia Toro; two great-grandchildren, Emily Johnston and Parker Miles; and numerous nieces, nephews, and step-children. Funeral services are planned on January 22, 2020, at 11am, at Ullrey Memorial Chapel, 817 Almond St., Yuba City, with graveside services at Sutter Cemetery in Sutter. A reception will follow at Oak Avenue Church, 8790 Oak Ave., Orangevale at 2:30 pm.

The family of Aurora Perales Miles Harris created this Life Tributes page to make it easy to share your memories.