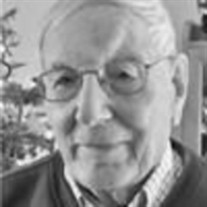 Bill Schmitz, a long time resident of Yuba City, passed away Tuesday, November 10, 2020, at his daughter's home. He is survived by his wife, Ilene; his son, Mark; four daughters, Patrice, Rhonda, Susan, and Lori; six grandchildren; thirteen great grandchildren; his sister, Carol, and his brothers, Robert and John. As his health failed, his devoted children were at his side, reflecting the loving care he had given them throughout their lives. The second of Joseph and Leonie Schmitz' eight children, Bill was born in Chicago on December 24, 1927. He was raised in Denver and San Jose and attended San Jose State before receiving his Baccalaureate in Electrical Engineering at UC Berkeley. He worked briefly for Westinghouse before signing on with PG&E, and married Georgette Ryan in 1950. They had three little girls by 1958, when PG&E promoted Bill to Colgate Division Lead Engineer and moved them to Yuba City. By 1965 there were five children in the family. Georgette passed away in 1992, and Bill retired from PG&E after 36 years. Bill was an active member of St. Isidore Catholic Church, often lending his expertise in electrical work. He was well known as a kind, helpful, bright, yet humble servant. There he met another parishioner, Ilene Fratus, and she and Bill were married in 1993. During their 27 years together Bill and Ilene volunteered frequently at St. Isidore, as well as traveling and enjoying their retirement. There will be a rosary at 10:00 AM Saturday, November 21, 2020, followed by a service at 10:30 at St. Isidore in Yuba City. Graveside service and interment at Sutter Cemetery in Sutter will be at 1:00 PM. Ilene asks that contributions be made to the American Cancer Society in lieu of flowers. The family is grateful for the kind and able assistance given by Sutter North Home Health and Hospice and Butte Home Health and Hospice.

The family of Bill Schmitz created this Life Tributes page to make it easy to share your memories.

Send flowers to the Schmitz family.