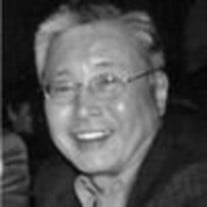 Bob "Bobby" Fukumitsu, passed away on March 9, 2022, in Yuba City, CA. He was 87 years old. Bob was born on June 24, 1934, to parents, Naozo and Harriet Fukumitsu, in Marysville, CA. Bob attended Barry Elementary School and Yuba City High School. Upon graduating he attended Moler Barber College in Sacramento, then moved to San Francisco to work for several years. In 1958, Bob married the love of his life, Fumi Fukui, and had celebrated their 63rd wedding anniversary in November. They moved back to Yuba City in 1961, and opened his first barber shop in the Yuba City Bowl (now Family Fitness). In 1966, he had his own shop built on Gray Avenue next to Kingwood Park. He was a very hard worker and was fortunate to have had so many loyal and caring customers, many through generations. Bob enjoyed fishing, watching and going to see the San Francisco Giants, SF 49ers, and the Sacramento Kings when time permitted. He was a devoted son to his mother when she had a need of assistance of any kind, and a caring brother to his siblings when they were in need. Bob is survived by his wife, Fumi; his son, Greg and his wife Kathy, and grandchildren, Corey and Kristi of Oxnard; his daughter, Lisa Komatsubara and her husband Kurt, and grandson, Parker of Gold River. He is also survived by many nieces and nephews. Bob was one of seven children. He was predeceased by his father, mother, brothers, Harry, Waichi, Bill, Ben, Joe, and his sister, Norma. Per Bob's request a private family memorial will be held at a later date.

The family of Bob "Bobby" Fukumitsu created this Life Tributes page to make it easy to share your memories.

Send flowers to the Fukumitsu family.