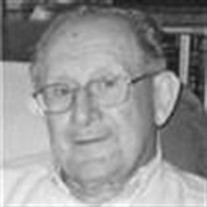 Bobby Dean Higgins, age 87, passed away peacefully on May 6, 2019 in Adventist Rideout Hospital. He was the second of 6 children born to Guy Julius and Cecil Higgins. Bobby was born at home on his family farm in Butler, Oklahoma on June 16, 1931. Bob remembers growing up in Oklahoma in the 4 room house with no electricity, no running water and the bathroom outside. The farm was the family's life where they grew cotton, peanuts, maize and the 18 head of cattle that needed milking everyday. Rain water for drinking and cooking was collected from a cistern. His mother was lucky to have a ringer washing machine with a gasoline engine and on Sundays Bob remembers taking the radio outside where it would get hooked up to the car battery while everybody listened to the Grand Ol' Opry. In the early 1940's, his family started heading west. Riding in the back of a pickup truck with all the family belongings, they made their first stop in Yuma, Arizona, then a few years later moved to Hallwood, CA. After moving to Live Oak in the 1950's, he was smitten by a teenage girl, Norma McFarland. They married on April 25, 1953, had 2 children and made Live Oak their home, raising their family and creating memories. As a young man, Bob had various jobs in farming before finding his last job at Stanton Engineering in Live Oak. He worked there over 40 years for 3 generations of the Stanton family before retiring. Bob was a Veteran of the Korean War and received the Purple Heart. Bobby is survived by his 2 brothers, George (Helene) of Dixon and Leslie (Melva) of Seattle; 2 sisters, Wanda Nevis of Live Oak and Donna (Mike) Crawford of Reno; daughter Denise (Joe) Viscuso of Gridley; son Gary (Dawn) Higgins of Yuba City; 6 grandchildren; 13 great-grandchildren and numerous nieces and nephews. Besides his parents, Bob is preceded in death by his wife of 59 years, Norma Higgins and sister Darla Carter of Live Oak. Graveside services will be held on May 15, 2019 at 11:00 am at the Live Oak Cemetery. Arrangements are under the direction of Ullrey Memorial Chapel.

Bobby Dean Higgins, age 87, passed away peacefully on May 6, 2019 in Adventist Rideout Hospital. He was the second of 6 children born to Guy Julius and Cecil Higgins. Bobby was born at home on his family farm in Butler, Oklahoma on June 16,... View Obituary & Service Information

The family of Bobby Dean Higgins created this Life Tributes page to make it easy to share your memories.

Send flowers to the Higgins family.