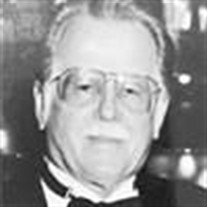 Charles L. Berrier was born May 12, 1931 in Albuquerque, New Mexico, the second son born to George and Sylvia Berrier. Charles died August 19, 2019 at his home in Rio Oso, CA. His early childhood years were spent in New Mexico, but in the early 1940's his family moved to the Yuba City area where he attended Yuba City High School, graduating in 1949. Upon graduation, he attended Virginia Military Institute for two years, then transferred to UC Berkeley to finish his college degree in Russian and Eastern European Studies in January 1954. He was in the Air Force ROTC program and was commissioned a Second Lieutenant in the US Air Force Reserve. In June 1954, he was called to active duty, 4602nd Air Force Intelligence Service Squadron (AISS unit) at Peterson Field, Colorado. During that time, he received special training at the US Army's Mountain and Cold Weather Training Command in Leadville, Colorado and then the Infantry School: Airborne and Jumpmaster Training in Fort Benning, Georgia. It was there that he met his wife, Hannelore Achtel. He married soon after and lived in New Jersey. He then was assigned to a detachment of the 4602nd stationed at McGuire AFB, New Jersey. From there, he went on to the 5004th AISS at Elmendorf AFB, Alaska until January 1959. He then transferred to George AFB, CA and spent five months in southern Spain, interpreting Spanish for his commanding officer, for a close friend of President Eisenhower and for General Sweeney in Madrid. In March 1960, he returned to civilian life in Portland, Oregon where he and his wife, Hannelore bought a home. By then, he and Hanne had two children, Stephen and Sabine. He worked in a private electronics firm as an applications engineer, then landed a job at the Republican State Central Committee, campaigning for Mark Hatfield who was governor and then became Oregon's senior senator. He then was offered a job teaching Russian and German at the University of Oregon in Eugene, Oregon. He enrolled in a full graduate program leading to a Master of Arts degree in 1963. He was chosen to be involved in an intensive Russian program in Finland. His first teaching assignment was as an instructor in Modern Languages at Western Illinois University in Macomb, Illinois. In the summer of 1965, he passed the language exams for the Ph.D. He ended up being offered a teaching position at Yuba College soon thereafter teaching German, French and Russian. Across the years, he received NDEA Fellowships to attend summer institutes in Russian, one at Reed College in 1966 and two at the University of Colorado, Boulder in 1968 and 1969. He led an All-American College Tour to the USSR in the summer of 1969. In 1973, he took a sabbatical leave, spending time at the University of London, School of Slavonic Studies and traveled to the USSR during the winter. He taught English, German and French throughout his remaining years of teaching at Yuba College until retirement in the lat 1990's. During the years he lived in California, he acquired farming property and eventually built a home in the Rio Oso area where he lived for 43 years. His wife, Hannelore, preceded him in death nearly six years ago. He is survived by his two children, Stephen Berrier (Yana) and Sabine Davis (Martin), six grandchildren and thirteen great-grandchildren. He will be greatly missed by his family members but is at last reunited with his wife of nearly 60 years. A memorial service will be held at The Bride Church located at 1321 Peach Tree Lane in Yuba City, CA on September 7, 2019 at 10 am, reception to follow

Charles L. Berrier was born May 12, 1931 in Albuquerque, New Mexico, the second son born to George and Sylvia Berrier. Charles died August 19, 2019 at his home in Rio Oso, CA. His early childhood years were spent in New Mexico, but in the early... View Obituary & Service Information

The family of Charles L. Berrier created this Life Tributes page to make it easy to share your memories.

Send flowers to the Berrier family.