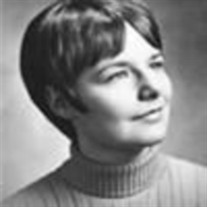 January 31 1949 – March 19, 2021 Cheryl LaBrie Walls, of Yuba City, CA, was the eldest child of John B. LaBrie and Madonna King LaBrie. She was born January 31, 1949, in Escanaba, Michigan. She is survived by her husband of 49 years, Glen Walls; son, Nathan Walls (Robin) of Easton, PA; sisters, Judy Crump (Richard) of Naples, FL, Deborah Hixon of Gladstone, MI, and Mary Martinson of Powers, MI; brother, John LaBrie (Cheryl) of Wind Lake, WI; many nieces and nephews; as well as grandnieces and grandnephews. Her parents and infant sister, Laura predeceased her. As a child, Cheryl attended St. Joseph Catholic School in Escanaba, along with her siblings. She attend high school at Escanaba High School where she graduated with honors in 1967. Following a year at Bay de Noc Community College, she transferred to Michigan State University, where she graduated with honors in 1971. She received a BA in English and a secondary level teaching certificate. While at MSU she met her future husband, Glen Walls. They married in January 1972, and less than two years later began a twenty year adventure in the U.S. Air Force ending in 1994, at Beale AFB, CA. While Glen was stationed at Offutt AFB, NE, Cheryl completed an accounting degree at University of Nebraska Omaha. Subsequently, she worked as an accountant for Continental Can Company in Omaha; as an auditor/appraiser for the Sutter County Assessor's Office; as an auditor for the California Bureau of State Audits and as an accounting analyst for the California State Lottery. In her free time, Cheryl enjoyed reading (a love she got from her father), flower gardening, birdwatching and visiting our western national parks. Cheryl succumbed to the effects of several chronic diseases including PKD Foundation. Her last days were spent as a patient at Sutter Medical Facility in Roseville, CA. Cheryl's family wish to thank the trauma team staff, medical/surgical floor staff and all the specialists who provided her outstanding care while she was at Sutter Roseville. Cremation has been at the direction of Ullrey Memorial Chapel in Yuba City. A memorial service will be arranged in the late spring when it is safe to do so. Interment is planned at Sunny Side Cemetery on Whidbey Island, Washington. If you wish to make a donation in Cheryl's memory, please consider the PKD Foundation (PKD Foundation) Foundation at pkdcure.org or a charity of your choosing.

The family of Cheryl LaBrie Walls created this Life Tributes page to make it easy to share your memories.

Send flowers to the Walls family.