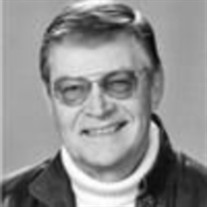 Clinton William Andreasen, 80, died unexpectedly at his home on September 7, 2021. He was born March 19, 1941, in Virginia City, Nevada, the middle son of Clinton Brendt Andreasen and Shirley Frances (Muckle) Andreasen. He attended elementary and high school in Virginia City, Nevada. He played on Virginia City High School's winning basketball teams during 1957 and 1959. He graduated high school in 1959, then attended the University of Nevada in Reno for three years. Clint married the late Linda McFarland in 1963. To that union, a son, Clinton, and daughter, Karen, were born. His employment history included Director of Self Insurance at Diamond International in Red Bluff and Workers' Compensation Supervisor with Liberty Mutual Insurance Company in Sacramento. He was preceded in death by his parents, his previous wife, Melinda; son, Clinton Brian Andreasen, and a brother, Thomas Wayne Andreasen. He is survived by his wife, Gladys (Jean); daughter, Karen Andreasen; grandson, Brian; brother, Fred, and other extended family in Nevada. Clint's Air Force service from 1960 to 1966 was a source of great pride to him. He was very interested in politics and eager to share his opinions. He loved his cat, Lola; she returned that love and misses him greatly. Ullrey Memorial Chapel is handling arrangements for a graveside service to be held Monday, September 20, 2021, at 9:00 a.m. in the military section of Sutter Cemetery. In lieu of flowers, donations may be made to a charity of your choice.

The family of Clinton William Andreasen created this Life Tributes page to make it easy to share your memories.

Send flowers to the Andreasen family.