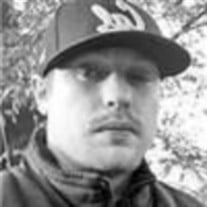 On November 26, 2020, Cody Russell Stratton was suddenly taken from this earth in a selfless act to defend a friend and he was lost to an unnecessary act of violence. Cody lived his life selflessly, always thinking and doing for others. He was a very ambitious young man that had a passion to succeed in whatever he did in life and didn't like to settle for less. The best thing about it is he was never afraid to work for it and did not rely on entitlement to get ahead. Cody also had big dreams for himself as a family man and father figure and would always make references as to how he would father his children and be there for them always. He was well on his way with building his future and his dreams. He is greatly loved and missed by all that truly knew him. Cody is survived by his mother, Sherry Mansel; father, Bob Stratton; 1 sister, Tara Stratton; 2 brothers, Jordan Mansel and Christian Ibbotson, all of Yuba City; girlfriend, Sarah Brennan of Yuba City; grandparents, Mary and Gene Ginochio of Live Oak; and grandmother, Martha Alrarez of Yuba City. From his mother's side of the family he is also survived by his aunt, Janeen Mansel; and uncle, Daniel Simeroth of Yuba City; aunt, Kim Mansel-Lane of Vacaville. From his father's side of the family, uncle and aunt, Vic and Millie Stratton of Rusk, TX; aunt, Peggy Parks of Live Oak; aunt, Laura Slinkard-Sewell of Yuba City; and many cousins including his special Zander. He is preceded in death by his aunt, Eva Parks-Walker; uncle, Russell M. Parks-Slinkard; and uncle Steven Stratton. A private family service will be held Thursday, December 17, 2020. Donations in Cody's memory may be made to Gray Avenue School Scholarship Fund for achieving children with Attention Deficit Disorder.

On November 26, 2020, Cody Russell Stratton was suddenly taken from this earth in a selfless act to defend a friend and he was lost to an unnecessary act of violence. Cody lived his life selflessly, always thinking and doing for others. He was... View Obituary & Service Information

The family of Cody Russell Stratton created this Life Tributes page to make it easy to share your memories.

Send flowers to the Stratton family.