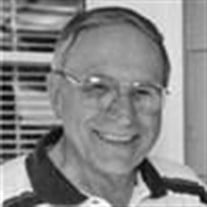 Dewey Dwain Mostad of Yuba City, CA, passed away peacefully at home surrounded by his family on October 17, 2019 at the age of 89. He was born at home on April 2, 1930 in Grand Forks, North Dakota. He was drafted in 1950 while in college and enlisted in the Air Force in 1951. He attended aviation cadets and became a radar navigator/bombardier working in the Strategic Air Command. He was eventually stationed at Castle Air Force base in Merced where he met a beautiful, young nurse named Helen. They were married in 1954 and beginning in 1956 3 kids came in 3 years. Dewey served during the Korean War and later flew combat missions in Vietnam while being stationed with his family on Guam. He earned an Air medal, Vietnam Service campaign medal, Air Force Commendation, National Defense Ribbon, Republic of Vietnam campaign medal, Air Force unit citation medal and 8 other service medals. He retired as a Lt. Col. after serving for 23 years then worked as a manager for Inland Tractor Co. and Growers Ag services. He is survived by his wife of 64 years, Helen; his son Chris (Donna) Mostad of Carmichael; daughters Holly (Patrick) Verhalen of Yuba City and Laura (Stephen) Livesay of Merced; 7 grandchildren and 5 great grandchildren. He is preceded in death by his parents Seward and Emma, his brother Newell, and his sister, Roma. He was past president of First Lutheran church, Tanglewood homeowners association, and Alta chapter of the military officers association. He was also a former member of Sons in Retirement. He was a man known for his love of music, having sung in singing groups in high school and played in dance bands during college and his early years in the Air Force. His kids knew his music best with regular sing-alongs among family and friends accompanied by his ukulele. Dewey loved people and looked forward to yearly summer treks to Aptos and winter treks to Palm Springs with family and friends. On the home front he could be found on the golf course or at his mens coffee clatch. His children will be forever grateful to him for teaching them to love and serve the Lord. As a grandpa, he will be remembered for his tender heart, his fun and playful spirit, and long walks on the beach searching for shells. A memorial service will be celebrated at St. Andrew's Presbyterian church on November 29, 2019 at 11 a.m. with Pastor Garrett Andrew officiating. Military honors will be provided by Beale Honor Guard. Arrangements are under the direction of Ullrey Memorial Chapel.

Dewey Dwain Mostad of Yuba City, CA, passed away peacefully at home surrounded by his family on October 17, 2019 at the age of 89. He was born at home on April 2, 1930 in Grand Forks, North Dakota. He was drafted in 1950 while in college and... View Obituary & Service Information

The family of Dewey Dwain Mostad created this Life Tributes page to make it easy to share your memories.

Send flowers to the Mostad family.