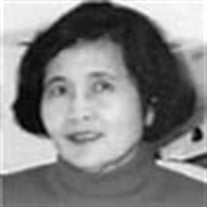 Dominga "Meng" S. Clarin, went to be with the Lord peacefully on December 29, 2019. Born in Narvacan, Ilocos Sur, Philippines, she was the daughter of Florencio Clarin, Sr., and his wife, Flora S. Clarin. She was driven by the pursuit of a better life for her family and community. This was evident in her passion for improving the lives of others and serving the community through civil service, charity and humanitarian activities. She continued this interest throughout her life. In the Philippines, she attained a Bachelor's degree in Education from the Philippine Normal University, which earned her a position as a public elementary school teacher. She performed many roles in different capacities, especially her role as a demonstration teacher, whose duties comprised of teaching a variety of school subjects to various area elementary schools. She was also the District Coordinator of the Philippine Girl Scouts, consisting of twenty schools within the district, responsible for organizing community events, functions and philanthropy. During this time, she also attained her Master of Arts degree in School Administration from Manuel L. Quezon University. She moved to Hawaii in 1976 to be with her mother and siblings. She attended the Kenway School of Accounting and also worked in the line of accounting. At the invitation of her sister, Nazaria (Feling) Cantoria in Marysville, she took the opportunity to move to California in 1978. Since then, she has been a lifelong resident of the Yuba-Sutter area. She worked for Sutter County, with the Department of Human Services, Welfare and Social Services division for thirty years. While working for the County, she continued her education and received a Masters in Business Administration from the National University in Sacramento. She played an integral role for serving the citizens of Sutter County during Yuba-Sutter's catastrophic floods of 1997. She retired as Chief Fiscal Supervisor in 2009. She also served the Yuba-Sutter community through her active involvement with the Tri-County Filipino-American Association (TCFAA) for over forty-one years. She served as president and held various elective and appointed positions throughout the years. During her term as president, she endorsed and completed a project that led to the TCFAA securing and purchasing a building for the organization. A lifetime parishioner at Saint Isidore Catholic Church, she continued to be active in many functions and ministries within the church. She was a member of the Saint Isidore Catholic Church's Young Ladies Institute #231, Filipino ministry group, fostering Christian principles of charity and love through community outreach. She was proud and humble working with many dedicated members of the community and thankful to have been a part of their lives. She is preceded in death by her parents, Florencio Sr. and Flora Clarin; her sister, Nazaria (Feling) Cantoria; and brother, Moises S. Clarin. She is survived by her sisters, Rose Cabana of Highland, Juanita Supnet and Virginia Supnet of the Philippines, Francisca Clarin and Irene Supnet of San Jose, and Carrie Cabonias of Yuba City; and a brother, Florencio Clarin, Jr. of Las Vegas; her many nieces and nephews throughout California, France, Japan, Qatar, South Korea, Philippines; and several great-nephews and nieces throughout the United States. A vigil service and visitation will be held on Sunday, January 19, 2020, at Ullrey Memorial Chapel, between 12:00 PM to 5:00 PM. A rosary will be recited at 3:00 PM. A Mass of Christian Burial will be held at Saint Isidore Catholic Church on Monday, January 20, 2020, at 10:30 AM. Interment will be held at Sierra View Memorial Park and Mortuary.

Dominga "Meng" S. Clarin, went to be with the Lord peacefully on December 29, 2019. Born in Narvacan, Ilocos Sur, Philippines, she was the daughter of Florencio Clarin, Sr., and his wife, Flora S. Clarin. She was driven by the pursuit of a better... View Obituary & Service Information

The family of Dominga "Meng" S. Clarin created this Life Tributes page to make it easy to share your memories.

Dominga &quot;Meng&quot; S. Clarin, went to be with the Lord peacefully...

Send flowers to the Clarin family.