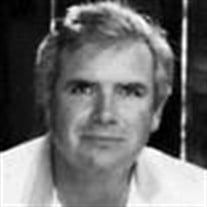 Eugene Donald Ulm Jr., a man who was surrounded by women and cats, loved NASA, Star Trek, and his family (importance in reverse order) died Saturday February 16, 2019. Gene was born in Chico, California and spent his youth in Tuolumne County, where he walked five miles to school, uphill both ways, in the snow, 365 days a year. Gene attended Sonora High School where he played football, as he said: "like a stud". It was in High School where he discovered a love for politics, a love and (mostly) hate relationship that would last the rest of his life. After graduation he attended California State University, Sacramento where he played football for the Hornets and was a member of College Republicans (Ronald Reagan). Gene majored in History and Political Science. Obviously, because you can do anything with a degree in History and Political Science. After graduation he worked for Tuolumne County Sheriff's Department. When he remembered that he did not like living in snow, Gene followed in his father's, Gene Ulm Sr. of Yuba City, footsteps' to become a Peace Officer with the California Department of Corrections. A career choice he mostly referred to as his time working for "The Hallmark Greeting Card factory", because he would bring joy to all of his "clients". Gene had the pleasure of being surrounded by wonderful women in his life. Gene worshipped and loved his mother Josephine, (deceased) who taught him and his sister Denise of Sacramento her recipe for holiday fruitcake and cheesecake. In Gene's late twenties he met his wife of thirty years, Diane of Yuba City, the friend of his then girlfriend. Diane spilled popcorn on him, and he fell in love. Despite making Diane run away when he first professed his love, Diane and Gene later married in 1988 and raised two daughters after settling in Yuba City in 1993. Gene taught his daughters Rebecca of Sacramento, and Robin of San Antonio, life's essentials: How to pick the right hammer for the job. The greatness of Star Trek. How to properly shoot a gun, the importance of having a good work ethic, and that there is a Shakespearean insult for every situation. His most impressive lesson wasn't taught but modeled: just be a good person. His life's pride, other than his impressive grasp of Klingon, was his granddaughter Emma Leija of San Antonio After retiring from the Department of Corrections in 2010, Gene went back to school and earned his Masters in Education. His motivation being the years of deplorable answers to the question: "What did you learn in school today?" Because competing in cat shows with his rescue cat "Rugby", and the ever growing honey do list wasn't enough to keep him busy, Gene got a job at the local Home Depot. His favorite part was working in the garden department, where he excelled in growing everything except tomatoes. The Home Depot was his secret joy, and it gave him the opportunity to share all of his fascinating life stories with just about anyone who wanted to listen. Gene understood that a captive audience is a valuable commodity. Gene and his holiday light shows were the real celebrity in his family. Community members from all over the area would drive by and enjoy Gene's Halloween (Aliens and Star Trek) and Christmas (Peanuts) light shows. Lovingly created and synced to music with a home built switchboard and his Raspberry PI. He would often lament daylight savings time, which would limit the trick or treaters time. Halloween was Genes' favorite holiday, and he would sew costumes for his granddaughter Emma. A memorial service for Gene will be held at Ullrey Memorial Chapel on Almond Street in Yuba City, Saturday, February 23, 2019, at 1:00 pm. Reception is to follow.

The family of Eugene Donald Ulm Jr. created this Life Tributes page to make it easy to share your memories.

Eugene Donald Ulm Jr., a man who was surrounded by women and...

Send flowers to the Ulm family.