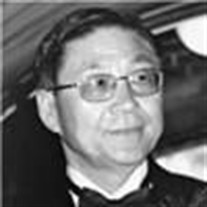 Doctor Eyoungsoo Park, peacefully passed away on January 4, 2020, at the age of 81. Born in a small Korean village, he was able to earn top honors in his classes and move to Seoul where he graduated from Seoul National University with a Masters Degree. With his wife Kwon and newborn daughter Susan, he attend Washington State University and earned his PhD in Clinical Psychology. During his studies his son, David, was born. In 1971, the family settled in Yuba City, CA, where the youngest of the family, Eric was born. In Yuba City, Eyoungsoo was the county Psychologist for Sutter County. Eventually he worked for the State of California in the Marysville office where he helped Parolees until he retired in 2007. He was active in the Korean/American community as a volunteer. Eyoungsoo had many friends from different walks of life. He made close friends through his assistance with the foundation Friends of Korea and even became an ordained minister to officiate a marriage of his good friends. It was always fun to guess whether he was having lunch with a friend from work, ski club, college friend or a trusted family friend. His main advice to his kids was "when you do something, do it your best". He lived this through his work, and play. Whether he was trying to learn to ski powder in his senior years, or biking and kayaking, he enjoyed the challenges. With the age of the iPad, he also conquered Words with Friends. In Yuba City, he loved raising his farm animals at his "land". Another favorite paradise for him was his "cabin" in Truckee, which he had built with the goals of a great place for family and friends to gather. Of all his loves in life, he was most generous with his family and appreciated time spent together. His brother Dr. Taisoo Park was the lone sibling to come to the United States and lived in Southern California. His wife Kwon, had sisters in Chico, CA and Southern California and they were treasured family members. He is survived by his wife, Kwon Park; children, Susan Kim, David and Eric Park; and grandchildren, Brandon and Justin Kim, Mia and Lukas Park, and Naomi and Yannik Park. On behalf of his family, we invite you to attend his funeral Monday, January 13, 2020, 10am at Ullrey Memorial Chapel.

Doctor Eyoungsoo Park, peacefully passed away on January 4, 2020, at the age of 81. Born in a small Korean village, he was able to earn top honors in his classes and move to Seoul where he graduated from Seoul National University with a Masters... View Obituary & Service Information

The family of Dr. Eyoungsoo Park created this Life Tributes page to make it easy to share your memories.

Send flowers to the Park family.