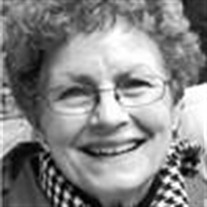 Francis Ann Cardwell was born in February 1936 in McGehee, Arkansas, the only child of parents Micajah and Louise Cardwell. The Cardwell family moved to Yreka, CA, at the beginning of WWII, then to Pleasant Hill, CA, where Ann graduated from Mount Diablo High School (1953) and then graduated from East Contra Costa Junior College in 1955. It was in Pleasant Hill that Ann started her eight-year career as an escrow officer. In 1958 Ann married Bill Rusk and they moved to Reno, Nevada. While in Reno Ann and Bill adopted two children - Margaret Ann (1964) and Thomas William (1965). Returning to California, Ann resumed her pursuit of higher education. At age 32 she started college at California State College, Hayward, where she graduated magna cum laude and completed her BA degree in 1970 and her MA degree in 1971. Ann started her teaching career at Yuba College in September 1971. She was a very effective, talented, and popular teacher of psychology. For 4 years (1979-1983) she was appointed to the position of Assistant Dean of Instruction and Director of Public Events. Though she was very successful in these positions, teaching was her true calling and she returned to the classroom until she retired in 1994. Divorced from Bill Rusk (1976), Ann married Rex McDougal in 1980. This marriage came with four (4) stepchildren - Vickie McDougal, Linda Tull (Scott), Tim McDougal (Kim) and Chris McDougal. This combined family now has 13 grandchildren, 16 great-grandchildren, and 1 great-great-grandchild. In retirement, two of Ann's greatest pleasures were gardening and travel. With a one-acre yard, it was not unusual for her to spend a full day planting, watering, pruning, and otherwise nurturing and maintaining her gardens. Owning motorhomes for 20 years allowed Ann and Rex to extensively explore the western United States and Canada. A favorite motorhome trip was an almost annual trip to Victoria, BC. Other travel with friends included trips to Mexico, Canada, and 6 trips to Europe where 13 different countries were visited. Ann was a composition of the best of qualities. She will be remembered as someone very special by everyone whose life she touched. 10/22/2019A memorial service will be held Saturday, November 2, 2019, 11:00 am at Ullrey Memorial Chapel in Yuba City, followed by a celebration of Ann's life at Hillcrest Landing (formerly Ruthy's) at 1:00 pm.

Francis Ann Cardwell was born in February 1936 in McGehee, Arkansas, the only child of parents Micajah and Louise Cardwell. The Cardwell family moved to Yreka, CA, at the beginning of WWII, then to Pleasant Hill, CA, where Ann graduated from... View Obituary & Service Information

The family of France Ann McDougal created this Life Tributes page to make it easy to share your memories.

Francis Ann Cardwell was born in February 1936 in McGehee, Arkansas,...

Send flowers to the McDougal family.