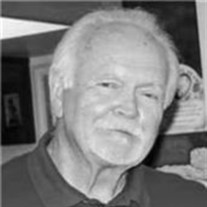 George Allen Haas, 83, of Yuba City, CA, passed away on April 13, 2021, after a 5-year long battle with Alzheimer's Dementia. At the time of his passing, he was at home surrounded by loved ones. George was born on September 27, 1937, in Dayton, KY, to Earnest Clifford and Lillian Elizabeth (McNulty) Haas. He was the second son in a family that would grow to a total of 9 children. George spent his childhood in Northern Kentucky until he enlisted in the Navy in 1956, serving on the U.S.S. Oak Hill (LSD-7) in the Korean War. While stationed in San Diego, CA, he met a beautiful minister's daughter at a birthday party, and they were married on April 12, 1958. Barbara Jean was the love of his life for 53 years until her passing in 2011. George began his career with PG&E cleaning out boilers while attending night school on the GI Bill. He became a gas line planning and design (drafting) engineer and retired from PG&E after 40 years of dedicated service. During his time with PG&E, he worked all over Northern California at different offices, including San Ramon, Marysville, and Auburn. He is survived by his son, George Allen Haas, Jr. (Susan); daughter, Patricia Ann Duncan; daughter, Bobbi Jean Schoeneck (Elwin); grandsons, Joseph (Mandy) Wolffe, Joshua (Makayla) Wolffe, Alexander Fink, Stephen White, Abram Schoeneck, Wesley Schoeneck, and Jameson Schoeneck; granddaughters, Lindsey Jiles and Lauren Jiles-Jones; six great-grandchildren; brothers, Donald (Sue) Haas, James (Lois) Haas; sisters, Linda (Tom) Fortner, Kathleen Haas, and Pamela Schmidt. George is preceded in death by his loving wife, Barbara Jean Haas; brothers, Charles Woods and Earnest Raymond Haas; and sister, Nancy Haas. The family wishes to express their heartfelt thanks to Dr. Keith McAfee, Sutter North Hospice, and Rene Murphy for their exceptional care and concern. Dad, you were the best father we could have ever asked for; we're so thankful you were ours. Until we meet again, rest in peace. We love you. A graveside service, including military honors, will be held at Sutter Cemetery on Friday, April 16, 2021, at 11:00am. Arrangements are under the direction of Ullrey Memorial Chapel of Yuba City, CA.

George Allen Haas, 83, of Yuba City, CA, passed away on April 13, 2021, after a 5-year long battle with Alzheimer's Dementia. At the time of his passing, he was at home surrounded by loved ones. George was born on September 27, 1937, in Dayton,... View Obituary & Service Information

The family of George Allen Haas created this Life Tributes page to make it easy to share your memories.

Send flowers to the Haas family.