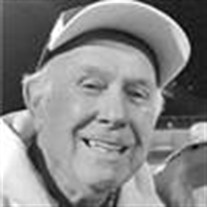 George Randall Post, age 89, of Yuba City, passed away on Sunday, December 22, 2019. He is survived by his loving wife, Elizabeth Post, sons, Doug and wife Elizabeth, Brad and wife Deena and John and wife Thea, grandchildren Kari Nahlen and husband Blake, Ashley Post, Katie Bossio and husband Colin, Taylor Post, Randy Post, Caroline Post, and great grandchild, Evelyn Bossio. He was preceded in death by his parents, George and June Post, his devoted wife of 50 years, Dottie Post, and his brother, Doug Post. George graduated from Oroville High School in 1948, and received his Bachelor's Degree in Horticulture from the University of California, Davis, in 1952. Following graduation George served in the United States Air Force for four years and was stationed in Frankfurt, Germany. Professionally George worked at the County Agriculture Extension Service as a County Farm Advisor for twelve years and, in 1968, with Partner, Bob Hanke, formed the first private agricultural advising firm in California, named Agricultural Advisors, Inc. in Yuba City, which is currently owned and managed by his son, John, and where grandson, Randy, also works. Apart from being a wonderful husband and father, George loved sports and enjoyed following the UC California Bears and all of the San Francisco professional teams especially the Giants. One of his favorite personal sports stories, that his sons would eventually 'kid' him about (because we heard it a few times when we were younger), was the "Chico Catch". In 1952 UC Davis and Chico State were playing for the conference baseball title and in the last inning, with runners on first and third base and one out, and Davis up by one run, George dove to his right, caught a line drive and while still in flight, threw to first base for a double play to win the conference title. George was also an avid fly fisherman and had the opportunity to fly fish throughout the world, often with his fantastic business partner and best friend, Bob Hanke. He also won many 'Biggest Fish' titles while fishing with his sons, their friends, his son's wives and his grandchildren, including his last fishing trip to the Snake River in the Summer of 2019. The family would like to thank caregiver, Maria Raya, for all of her stellar and dedicated efforts in caring for George. George was fortunate to have many quality friends and supportive business associates and all are welcome to join his family for his gravesite ceremony which will take place on Monday, January 6, 2020 at 10:00 a.m., at the Sutter Cemetery. In lieu of flowers, it is requested that donations be made to Sutter Care at Home Yuba City (Hospice) 400 Plumas Street, Suite 115, Yuba City, California 95991, (530) 749-3460

The family of George Randall Post created this Life Tributes page to make it easy to share your memories.