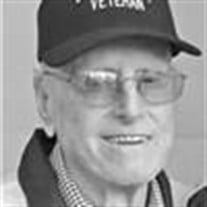 (1928 - 2019) George E. Smith, 91, went to be with his Lord and Savior on Sunday, August 11, 2019 at Adventist Health + Rideout Hospital. He passed away peacefully surrounded by several family members and friends. George was born on February 6, 1928 in Brownfield, Texas. He moved to California with his parents and siblings in 1944. George was a faithful member and worshiper at Hope Point Nazarene Church where he fellowshipped for over 70 years. No matter what path George traveled, he was a servant of Christ first and foremost. After earning a degree at Pasadena College (now Point Loma Nazarene University), he married his wife, Georgene Smith and recently celebrated 69 years of marriage. He had a long career as a consummate educator. He went from teacher, to principal, to assistant superintendent of schools, and then in 1978 he began serving as the Superintendent of Schools for the Marysville Joint Unified School District, the office from which he retired in 1987. While working he earned his Masters Degree from Chico State University. In 1990 George continued his legacy by earning a seat on the Board of Education of Yuba County Schools, and at the time of his passing he was serving as the President of the Board. In 1953 he was drafted into the army during the Korean War and was stationed at Fort Ord where he proudly served his country. George served his community in many ways, including being a member of Lions Clubs International and a long time member of Rotary International. Throughout life, George had many interests, including sports, fishing and camping. He was Salutatorian for his High School and played football, basketball and raised animals for show. He loved Gospel music and western novels. For many years, up until the time he was hospitalized, he had coffee with his friends every morning. On one occasion he and his wife traveled to the Holy Land, and they often went back to visit Texas. George was a tremendous family man who loved and enjoyed his time with all of his family. He was proceeded in death by his parents, Donald and Jewel Smith, and his brothers Leroy, Lonnie and C.B. Smith. He is survived in life by his wife, Georgene (Garrett) Smith; his sister, Donna (Smith) Douthat and her husband Bill; his daughter, Jan (Smith) Walters, her husband Jim and their children Jimmy Walters, Jason Walters and Jenna Walters; his son, Larry Smith, his wife Tammy and their children Jami Clark Smith, Jennifer (Smith) Morrison and Jessica Smith; and his son, Richard Smith, his wife Christa and their children Brantley Smith and Garon Smith. He is also survived by his great grandchildren Brianna, Zachary, Colin, Cameron, Taylor, Avery and Paisley. He is also survived by several nieces, nephews, cousins and extended family. George will be loved and missed by many. He touched and influenced the lives of many people in the Marysville and Yuba City area through a selfless life of education, love and compassion for others. A celebration of George's life will be held at Hope Point Nazarene Church on Saturday, August 17, 2019 at 11:00 AM. A reception will immediately follow. In lieu of flowers, donations can be made to Hope Point Nazarene Church. Go to hopepointnaz.org for more information.

(1928 - 2019) George E. Smith, 91, went to be with his Lord and Savior on Sunday, August 11, 2019 at Adventist Health + Rideout Hospital. He passed away peacefully surrounded by several family members and friends. George was born on February... View Obituary & Service Information

The family of George E. Smith created this Life Tributes page to make it easy to share your memories.

Send flowers to the Smith family.