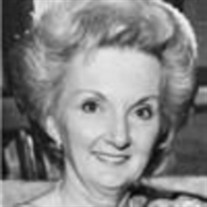 November 3, 1929 - April 21, 2022 Georgia Blair Poulos died on April 21, 2022, at the age of 92. She is survived by two of her four children and numerous grandchildren and great-grandchildren. Georgia was the long time owner and operator of the "Uriz on A" restaurant and bar where she was well known for her hospitality, dinner rolls and soups. On May 28, 1988, after the death of their respective spouses, Georgia married Colonel William E. Poulos, AUS (Ret.), at St. Joseph Catholic Church in Marysville, California. World-wide adventures were then opened to Georgia. For many years, the couple took extended yearly trips to Europe to visit with long-time friends in London, (where they shared a flat with a Knight of the British Empire, who had fought in World War II with Bill); in Germany, on the Romantic Road; in Switzerland; and, in Nice, on the French Riviera, (where they shared a villa with a Swedish army officer, who had been in the Arctic with Bill). Colonel Poulos pre-deceased Georgia in 2017. A Catholic Mass of Christian Burial will be celebrated in Corning, California, at 11:00 a.m. on May 12, 2022, at Immaculate Conception Catholic Church, preceded by a Rosary at 10:00 a.m. Georgia will then be buried following the Mass in Corning near the "Raiser family plot" shared by her parents.

The family of Georgia Blair Poulos created this Life Tributes page to make it easy to share your memories.

Send flowers to the Poulos family.