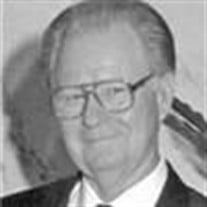 Hardy died peacefully after a brief illness at Rideout Memorial Hospital on April 5, 2019, at the age of 92. Hardy was born on April 26, 1926, in Hollywood, California, at White Memorial Hospital to Harden "Hoot" McFarland and Francis Ruth McFarland and moved to Sutter, California, in 1933 to live with his grandparents, Frank and Nellie Lemenager. Hardy spent his youth in Sutter, attended and graduated from both Brittan Elementary School and Sutter Union High School. Hardy was known to his friends as Hardy, Mac, Little Hoot or Hooter. After school and on summer vacations he worked in the family garage on Acacia Street in Sutter where he learned mechanical skills that he utilized and enjoyed throughout his life. In his junior year at Sutter Union High School, Hardy enlisted in the US Air Force Flying Cadet training program and was called to active duty upon graduation in 1944. He received his pilot's license in 1948 from the old Cheim Field that was located in east Marysville. After being honorably discharged soon after World War II concluded, he stayed in the USAF Reserve and was recalled to active duty in 1950 during the Korean Conflict and was discharged as a Staff Sergeant in 1951. During his time in the military, Hardy received several recognitions and citations including the American Theater Ribbon, Good Conduct Medal, Victory Medal World War II and earned expert and sharpshooter qualifications in serving his country. In the early 1950's Hardy became active in stock car racing. He built and drove his own cars and raced in Marysville, West Sacramento, Quincy and Willows, among other local tracks. In 1956, he met the love of his life, Ardis Marie. They were married in 1959 in Reno, Nevada. About that time Hardy secured employment with the State of California, Department of Transportation (Caltrans). Ardis and her two boys, Greg and Gary, moved to Stockton, Eureka, North Hollywood and Sacramento, where Hardy retired in 1985 as the Equipment Department Coordinator for Caltrans. He thoroughly enjoyed his job and those that he worked with throughout California. Hardy, attended college wherever he worked and received an Associate of Arts degree from Sacramento City College. In 1988, he and Ardis moved back to Sutter to be near the Sutter Buttes and old friends. Hardy was always involved in the building and repairing of all types of equipment and mechanical items. After moving back to Sutter, he became active in restoring antique tractors and putting them in the Sutter Buttes Day Parade. Hardy and Ardis enjoyed traveling around the world together in their retirement years. Their travels took them to 68 foreign countries by bus, train, airlines and cruise ships. Racing hard tops and traveling the world with Ardis were the most memorable and enjoyable memories of his life. He was preceded in death by his parents, Ruthie and Harden McFarland. Hardy will be dearly missed by his family in California and Utah; wife Ardis, children Greg (Sharon) and Gary (Rachael), his grandchildren Justin (Jessica), Natilie, Dareth (Jesse), Tanner, Breckan (Spencer), Randy (Tierney) and Katie (Brian), and great-grandchildren Landon, Mason, Miranda, Ames, Wylie, Cormac, Flynn and Chloe. In keeping with Hardy's wishes, services will be private. Donations in his honor may be given to the Community Memorial Museum of Sutter County.

Hardy died peacefully after a brief illness at Rideout Memorial Hospital on April 5, 2019, at the age of 92. Hardy was born on April 26, 1926, in Hollywood, California, at White Memorial Hospital to Harden "Hoot" McFarland and Francis Ruth McFarland... View Obituary & Service Information

The family of Hardy McFarland created this Life Tributes page to make it easy to share your memories.

Hardy died peacefully after a brief illness at Rideout Memorial...

Send flowers to the McFarland family.