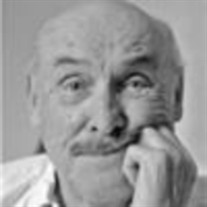 Harold Joseph Beeso, Jr., 87, of Yuba City, CA, passed away March 1, 2020. Harold was born April 6, 1932 in Worcester, Massachusetts. Harold had been a resident of Yuba City for the past 28 years. He retired from the US Air Force in July 1976. His most recent service was to the Disabled American Veterans organization where he served as a board member for several years. He was a member of the Veterans of Foreign Wars. He was very active in the community, serving on the Sutter County Grand Jury for two terms where he spearheaded the creation of the county's new animal shelter. He was a volunteer for the Hands of Hope which assists the homeless community in Yuba City. He also loved going to the Sutter Animal Services Center where he sponsored Harold was a true patriot, loved his country and had a 40 year association with the military. In 1949, at the tender age of 17, Harold joined the USAF where he was stationed in Japan and then Korea. Later he became a member of the USMC Reserves and he enlisted in the Air National Guard. He served in both the Korean and Vietnam Wars, retiring as a First Sergeant in July 1976. Harold is survived by his beloved wife, Martha of Yuba City, CA; sister Joan and brother-in-law Wayne and family of Rutland, MA; his children, daughter Ruth Greco of Sacramento, CA, son Bob and Dolores Beeso and family of Titusville, FL; daughter Michelle and Len Rankin and family of Yuba City; son Rick and Lisa Beeso and family of Tracy, CA; son Skiff Withrow and Connie Jo Rowland and family of Eagle Point, OR; and daughter Kristen and Mike Dorman and family of Yuba City, CA; 11 grandchildren and 14 great-grandchildren. Harold was preceded in death by his parents Harold Sr. and Ruth Beeso, his sister Pat Danserau, his brother Ronald Beeso, and his first wife, Sachiko Beeso and his grandson, Jason Bretz. A viewing is scheduled for Tuesday, March 10, 2020 from 4:00-7:00 pm at Ullrey Memorial Chapel. Mass will be Wednesday, March 11, 2020 at 10:00 am at St. Isidore Catholic Church, 222 Clark Avenue, Yuba City. A Celebration of Life will follow at approximately 11:30 at the Veterans Hall, 1425 Veterans Memorial Circle, Yuba City. All friends and family are welcome. In lieu of flowers, kindly make donations on Harold's behalf to the Disabled American Veterans, P.O. Box 1303, Yuba City, CA 95991.

The family of Harold Joseph Beeso created this Life Tributes page to make it easy to share your memories.

Send flowers to the Beeso family.