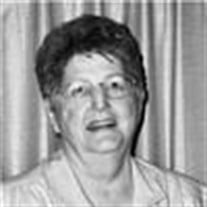 Helen "Joan" Becker, age 81, passed away peacefully at her Yuba City home surrounded by family on July 8, 2019. She passed after an extended illness of lung disease. Joan was born to George Sr. and Helen Lindsay in Billings Montana on March 20, 1938. She was raised in Signal Hill, California and graduated from Long Beach Polytechnic High School in 1956. She graduated from Butte County Hospital LVN program in 1967 and worked as an LVN in Yuba/Sutter area and Sonoma, California until retiring to be a fulltime homemaker and loving mother. Joan married Joseph Becker of Yuba City on July 24, 1966. Joan and Joe raised their blended family in Yuba City until moving to Eldridge California in 1984. In 1994 they returned to their home in Yuba City until moving to Paradise California in 2007. They then returned to Yuba City in December 2018 after their home was destroyed in the Camp Fire. Joan was active in the Paradise chapter of Eastern Star. She was also a member of White Shrine of Jerusalem, Lebanon chapter #93. Joan was also a parent support in Jobs Daughters when her daughters were young. She was very active in archery organizations and Hunter Education programs. In 2010 Joan was inducted into the California Bowmen Hunters Hall of Fame. She was an avid seamstress and established her own label, "Joan's Jitter Bug". She was a beautiful cake decorator and was hired to bake wedding and birthday cakes for many Yuba/Sutter residents over the years. Joan was a member of St Andrew Presbyterian Church in Yuba City. Joan is survived by her husband, Joseph Becker; daughters, Heather Voboril of Gig Harbor, Washington, Lisa Johnson of Killeen, Texas and Annie Eberhart of Yuba City; son, Pete Becker of Chico; eight grandchildren; and twelve great grandchildren. Joan is proceeded in death by her parents, George Sr. and Helen Lindsay; brother, George Lindsay Jr.; sons, Steven Eberhart and Michael Becker. Visitation will be held on Wednesday, July 17, 2019 at Ullrey Memorial Chapel in Yuba City, from 4:00pm to 7:00pm. A private burial will be held at Sutter Cemetery. A celebration of life memorial service will be held on Thursday, July 18, 2019 at St Andrew Presbyterian Church at 1:00pm, with a reception following. In lieu of flowers, memorials are suggested to the Sacramento Shriners Children's Hospital, St. Andrew Presbyterian Church or California Bowmen Hunters Hall of Fame or Foundation programs.

Helen "Joan" Becker, age 81, passed away peacefully at her Yuba City home surrounded by family on July 8, 2019. She passed after an extended illness of lung disease. Joan was born to George Sr. and Helen Lindsay in Billings Montana on March... View Obituary & Service Information

The family of Helen "Joan" Becker created this Life Tributes page to make it easy to share your memories.

Helen &quot;Joan&quot; Becker, age 81, passed away peacefully at her Yuba...

Send flowers to the Becker family.