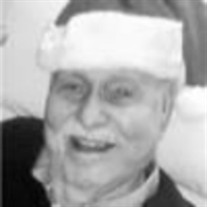 Howard C. Rogers, 92, of Olivehurst, CA, passed away November 26th, 2020, and is now with our Heavenly Father whom he loves so much. Howard was born August 18th, 1928, in Everton, AR, and had been a resident in the Yuba county area for 73 years. Howard was a Maintenance Engineer. He retired from Marysville Care and Rehab Center and Driftwood Convelesant Hospital in 1985. Prior work included Sunsweet seasonal work and a 1960's lumber mill outside of Olivehust. Howard was also a tractor operator, along with his Father James Rogers in thier beloved homestate of Arkansas. Howard was drafted into the Army During the Korean War. He served with the US Second Infantry Division where he was critically-wounded in action. Howard survived many serious injuries including a gunshot to the head. Howard recieved the Purple Heart and the Combat Infantry Badge for his military duty and did not like to talk much about his expieriance in combat. After a long recovery at the Letterman Hospital in San Francisco, Howard returned to Olivehust to be with his loving family, his father James Rogers, mother Bera, sister Merlene and many other relatives in the Yuba Sutter area. Howard married Earlene McCart of Olivehurst who he had previously met at his church in Olivehurst. Howard is survived by his sons, Dennis Rogers of Stockton, and Michael Rogers of Carmichael. Locally, his aunt, "Skinny" Eunice Newsome; cousins, Bob Jones and Mary Jones and their children; nieces and nephews, James and Sandy Stockton, Terri Delgado, David and Ren'a Cooper, and Tami Mertz and all their children; granddaughters, Sarah Nixon and Jennifer Holsey and their mother Janet Nakagawa; great-grandchildren, Vincent and Parker Holsey, and Hunter and Savannah Nixon. Rogers and Jones relatives in Arkansas. And many friends past and present, including Jim Haggard and Sam Bebout. Services will be held Thursday, December 10th, 2020, 11:00 am at Ullrey Memorial Chapel in Yuba City. Graveside service and Military honors at Sierra View Cemetery 12:30 pm

Howard C. Rogers, 92, of Olivehurst, CA, passed away November 26th, 2020, and is now with our Heavenly Father whom he loves so much. Howard was born August 18th, 1928, in Everton, AR, and had been a resident in the Yuba county area for 73 years. Howard... View Obituary & Service Information

The family of Howard C. Rogers created this Life Tributes page to make it easy to share your memories.

Send flowers to the Rogers family.