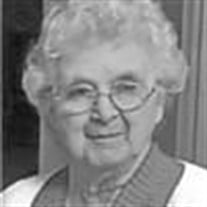 Irene M. Cooper, of Yuba City, passed away on June 6, 2019 with her loving family by her side. She was born August 28, 1932 in London, England. She was one of eight children that grew up in a small house near Waterloo Station. During the London blitz of WWII, Irene and three of her siblings were evacuated to Devonshire in South West England for the duration of the war. She had many stories of this time of her life and how frightening it was as a young child being away from her parents. Irene loved her work as a telephone operator in England. During this time she met her future husband Don Cooper who was in the U.S. Air Force assigned to RAF West Drayton. They were known to have gone dancing every weekend and were married in England October 11th 1958. They returned to the US permanently in 1970 settling in the Yuba City area when Don was transferred to Beale AFB. Irene loved her work as a server at Tony's restaurant for many years after which she worked at Bradley's Department Store in Marysville. She had a passion for cooking and baking and would love to prepare great meals for her family. Her favorite meal was her English Sunday dinners which she continued to make up to her last days. Irene loved attending church and rarely missed a Sunday service. She was a member of St. Isidore's Catholic Church in Yuba City. Irene will be missed for more things than we can ever mention. Above all, I know we will miss her great love she had for her family. Irene is survived by her husband of 60 years Don Cooper of Yuba City and sons Steven Cooper of Yuba City and Michael Cooper of El Dorado Hills. Granddaughters Melissa Haile of Marysville, Madeline Cooper of Yuba City, Stephanie Cooper of El Dorado Hills, grandson Joseph Cooper of El Dorado Hills, great grandson Levi Barnreiter of Yuba City, her brothers Harry Chaperlin of Tonbridge, England and Johnny Chaperlin of London, England. She is preceded in death by her siblings Edie, May, Elsie, Joey and Alfred of London, England. The visitation and service will occur at Ullrey Memorial Chapel on Monday, June 17, 2019 with visitation at 11:30 AM and the service at 1:30 PM. The graveside ceremony will be held at Sutter Cemetery followed by a small reception at a location still to be determined.

Irene M. Cooper, of Yuba City, passed away on June 6, 2019 with her loving family by her side. She was born August 28, 1932 in London, England. She was one of eight children that grew up in a small house near Waterloo Station. During the London... View Obituary & Service Information

The family of Irene M. Cooper created this Life Tributes page to make it easy to share your memories.

Send flowers to the Cooper family.