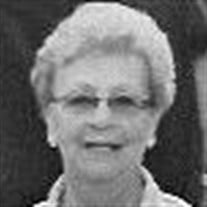 Jacqueline Dolores Atkinson passed away at Rideout Hospital on October 27th, 2019 at the age of 76. She was a lifetime resident of the Yuba-Sutter area. Jackie, as she was known, was born on May 25th, 1943 in Yuba City. She was the third of six children born to Curtis and Mildred Rigsby. She grew up in Yuba City. She moved to Marysville in her teen years and attended Marysville High School. She met Carthal Atkinson while in school and they were married in 1962. They had their first daughter Angela in December of 1962. She worked various jobs around the area. She started at Rideout Hospital, helped as a teacher's aide at Ella Elementary School and spent her summers working at Del Monte Cannery. Jackie had her second daughter Denise in May of 1968. In 1982, she began a 26-year career as a caregiver to mentally-challenged adults. After she retired in 2008, she moved to Del Prado Estates where she spent the best years of her life. She loved her friends at the park. Jackie loved to laugh and have a good time! She loved participating in the many events that were held at the park. She particularly enjoyed Bingo, playing cards, going to group dinners and taking road trips. Jackie loved talking to people. She never met a stranger she didn't like. She also loved being around her grandkids and hearing about everything they did. She will be greatly missed by everyone. Jackie is survived by her daughter Angela Kitchen (Stuart), stepsons Andy Atkinson (Laura), Allen Atkinson (Diane), grandchildren Makayla Delozier, Lance Delozier, Mikie Delozier, Kiley Johnson (Wyatt), Audrey Clayton (Jacob), and Garrett Kitchen, great-grandchildren Rosie Johnson and Rhett Johnson, brothers Ray Rigsby (Judy), Wes Rigsby (Marilyn), Dolan Rigsby, and sisters Barbara Rorie and Arlene Rominger and several nieces and nephews. She is preceeded in death by her daughter Denise Delozier, and parents Curtis and Mildred Rigsby. Per Jackie's request, there will be no memorial service.

Jacqueline Dolores Atkinson passed away at Rideout Hospital on October 27th, 2019 at the age of 76. She was a lifetime resident of the Yuba-Sutter area. Jackie, as she was known, was born on May 25th, 1943 in Yuba City. She was the third of... View Obituary & Service Information

The family of Jacqueline Dolores Atkinson created this Life Tributes page to make it easy to share your memories.

Jacqueline Dolores Atkinson passed away at Rideout Hospital on...

Send flowers to the Atkinson family.