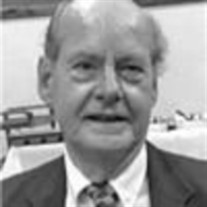 James "Morris" Cotter was born in Albany, California on May 30, 1940 and passed away at The Gardens on September 15, 2021. Morris's family moved to Yuba City when he was 8 years old. He graduated from Yuba City High School, class of 1959. He attended University of Nevada, Reno, on a Track and Field scholarship, completing his education at Chico State University, earning his Bachelor's Degree and Teaching Credentials. In 1965 Morris married Babs Seifert of Chico, after being introduced by mutual friends. Morris was drafted into the U.S. Navy in 1965, where he served on the USS Canberra off the coast of North Vietnam during the Vietnam War. In the years he was in the Navy he traveled to Japan, Taiwan, Vietnam and Hawaii. Upon discharge from the Navy, he continued his education at California College of Arts and Crafts in Oakland, taking graduate courses. In 1968 Morris returned to Yuba City where he began teaching Art and coaching Track and Field at Yuba City High School where he would go on to teach for 35 years. In 1970, Morris started his pottery business, Cotter's Pipe and Wheel. Morris and Babs participated in many Arts and Crafts Festivals across the western United States. Some of his favorite shows were the Hot Air Balloon Festival in New Mexico, and the Prune Festival and Christmas Goose in Yuba City. Morris was an avid Track and Field fan. He attended track and field meets as often as possible, and went to several Olympic Trials. He and Babs attended the Olympics in 1976 in Montreal and in 1996 in Atlanta. After he and Babs retired they traveled the globe, seeing the wonders of the world and meeting new people. They enjoyed traveling to new countries, talking with artists and seeing their studios. Their travels took them to Machu Pichu in Peru, the Pyramids in Egypt, the Basilicas in Italy, the Floating Markets in Thailand, the Parthenon in Greece, and other sites including Great Britain, Spain, Portugal, Jordan, China and Turkey. Morris is preceded in death by his parents Jesse David Cotter and Jacquelyn Daisy (Wallace) Cotter, and his sisters Frances Charlotte Cotter and Jacqueline "Jackie" Dean (Cotter) Dickey. He is survived by his wife of 56 years, Babs Cotter, their children Jennifer Cotter and Jeremy "Aaron" Cotter, two granddaughters Shelby (Curtis) Gunther and Ashley "Rowyn" Cotter, his brother David (Joan) Cotter and 11 nieces and nephews. A graveside service will be held in the military section at Sutter Cemetery on Thursday, September 23, 2021 at 11:00 am with a reception to follow at the Sutter Youth Organization Hall.

James "Morris" Cotter was born in Albany, California on May 30, 1940 and passed away at The Gardens on September 15, 2021. Morris's family moved to Yuba City when he was 8 years old. He graduated from Yuba City High School, class of 1959. He... View Obituary & Service Information

The family of James "Morris" Cotter created this Life Tributes page to make it easy to share your memories.

James &quot;Morris&quot; Cotter was born in Albany, California on May 30,...

Send flowers to the Cotter family.