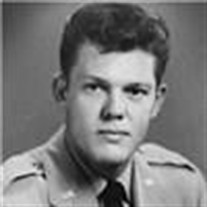 Major James Robert Hay, 85, of Yuba City, passed away September 23, 2019, surrounded by his family and friends. Jim was born in Connersville, IN, in 1934, to Robert and Pearl Hay. He graduated from Dayton University in OH and from Indiana State prior to serving honorably as an Air Force pilot where he achieved the rank of Major. Jim was a highly educated man earning three Masters Degrees. He taught at Yuba City High School, and was the Dean of Placement and Counseling, at Yuba College after 26 years of service. Jim touched and guided the lives of many in our community. His passion was the outdoors; traveling, hiking, fishing, camping and sitting outside in the rain listening to the thunder and watching the lightening. He traveled the world in the Air Force and hiked extensively in the US. He was a skilled carpenter, woodworker, mechanic and landscaper, building their home and the furniture in it with his bare hands. A loving husband and father who shared the joy of adventure, traveling with his family throughout the US. He was a member of St. Isidore Church for 55 years and served his community by volunteering at local charities, The Rescue Mission, and Veterans functions. Jim is survived by his wife, Barbara, of 62 years; children: Mike Hay, Carolyn Lathrop (Scott), Babette Pioro (Terrance), Todd Hay, and Michelle Woodard (Bryan); 13 loving grandchildren; 6 great-grandchildren; brother, Stephen Hay; sister, Regina Brown; and his Jack Russell, Sweet Pea. He is preceded in death by his parents; and brother, Jackie Hay. A viewing is scheduled Monday, September 30, 2019, 4-6pm, at Ullrey Memorial Chapel, followed by a Rosary. The funeral will be held Tuesday, October 1, 2019, 11am, at St. Isidore Church followed by a graveside service at Sutter Cemetery.

Major James Robert Hay, 85, of Yuba City, passed away September 23, 2019, surrounded by his family and friends. Jim was born in Connersville, IN, in 1934, to Robert and Pearl Hay. He graduated from Dayton University in OH and from Indiana State... View Obituary & Service Information

The family of Major James Robert Hay created this Life Tributes page to make it easy to share your memories.

Send flowers to the Hay family.