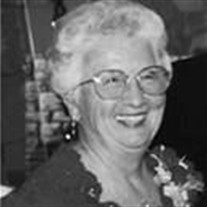 Janet Boley Jopson, 89, of Rio Oso, CA, passed away on June 28, 2019, at Kaiser Hospital, Roseville, CA. Born on February 25, 1930, to Charles and Elizabeth Clay Boley, she was the youngest of 7 children, and spent most of her life residing in Sutter County. She attended and graduated from Browns Elementary and East Nicolaus High Schools. Janet was a devoted and loving wife, mother, grandmother and great-grandmother, and was very active in and outside of her community. For ten years, she taught dozens of area children to swim at the South Sutter Recreation Association pool, she was active in the Brown's Parents Club, drove a school bus for many years, and was a supporter and leader of whatever organizations in which her children were involved. Janet spent decades working with the International Order of Rainbow for Girls, at the local and state levels. She also was a member of The Order of the Eastern Star, again serving at the local and state levels. From these two organizations alone she had friends all over California and many other states. In 2002, Janet and her late husband Wes, were honored for their community service by being chosen as the Grand Marshals of the Nicolaus Labor Day Parade. She is survived by sons, Thomas W. Jopson (Margaret), and David E. Jopson (Sandra), both of Rio Oso; a daughter, Shirley J. Giese (Bob) of San Diego; 7 grandchildren; and 10 great-grandchildren. She is also survived by numerous nieces and nephews. Donations may be made to California Rainbow Girls Foundation, Inc., c/o Mrs. Dana Regler, Supreme Deputy, 4745 North Palm Ave., Fresno, CA 93704-3002, checks payable to CRFGF and specify in memory of, The Alzheimer's Association of America, Del Oro Caregivers Resources Center, c/o Ann Spaller, Auburn Blvd., Ste. 265, Citrus Heights, CA 95610. Service will be held Monday, July 15, 2019, 10:00am, at Ullrey memorial Chapel, 817 Almond St., Yuba City, CA. Burial will be in Fairview Cemetery, Rio Oso with reception to follow.

Janet Boley Jopson, 89, of Rio Oso, CA, passed away on June 28, 2019, at Kaiser Hospital, Roseville, CA. Born on February 25, 1930, to Charles and Elizabeth Clay Boley, she was the youngest of 7 children, and spent most of her life residing... View Obituary & Service Information

The family of Janet Boley Jopson created this Life Tributes page to make it easy to share your memories.

Send flowers to the Jopson family.