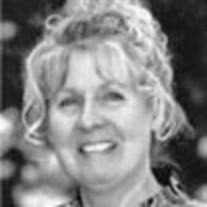 Janice Jenkins Schmidl, 76, of Live Oak, CA passed away on October 20, 2020 at her residence. She was born in Yuba City on July 13, 1944 at the old Fremont Hospital on the SE corner of Plumas St. and Colusa Ave. She was delivered by her grandfather, Dr. Irving Wilber Higgins, of Live Oak. Jan was a graduate of Encinal Elementary School in Live Oak and Notre Dame High School in Marysville. There she excelled in sports and played the 100 year old pipe organ at St. Joseph's Catholic Church for school services. She attended University of California at Davis, then married Robert Louis Schmidl of Live Oak. They were married for 33 years and owned and operated Sundown Farms, Inc. They raised peaches, prunes and walnuts. After the death of her parents, Bruce and Mary Jenkins in 2006, she and her sister, Sylvia, became owners of Jenkins Farms. In later years she attended California State University, Chico, where she majored in Cultural Anthropology. She was very active in the Yuba-Sutter community. She taught private piano lessons for 10 years and was a member of the Yuba–Sutter Piano Teachers' Club, Encinal Elementary School Mothers' Club, Live Oak Junior Women's Club, Live Oak Women's Club, California Women in Agriculture and the Feather River Chapter of Daughters of the American Revolution. She served on the Live Oak Unified School District Board of Trustees for 10 years, the Sutter County Planning Commission, the Board of Directors of the Yuba-Sutter Legal Center for Seniors and held a part-time position for the Yuba-Sutter Mental Health as a Patient Rights Advocate. She was a member of the Middle Mountain Foundation and was president of the newly reformed organization. She organized yearly picnic hikes into the Sutter Buttes, led by guide Joe Bouchard. Jan treasured her time in the Buttes. Family picnics and canoe trips on the Feather River were also favorite activities. On her 40th birthday she was given an unforgettable hot air balloon ride over her home on the farm. In later years she volunteered at the Sutter County Memorial Museum and Hands of Hope. She loved reading and traveling. She visited Mendocino, Belize, and Hawaii a number of times, and traveled to India. A five-week trip to Africa on a Primate Safari through the countries of Rwanda, Burundi, Tanzania and Kenya was one of the highlights of her life. She gave slide presentations to various civic groups when she returned. Survivors include two sons, Jim Schmidl (fiancee April Shirley) and Chris Schmidl (Kendra); a beloved granddaughter, Elizabeth; a sister, Sylvia Jenkins Lamon (David); a niece, Olivia Lamon; a nephew, Grady Lamon (Marianne); a great-nephew, Cameron Lamon; a brother, David Thompson (Mary); a cousin, dear friend and nurse Joanne Jenkins; numerous Jenkins, Higgins and Ross cousins; her oldest friends of over 70 years, John and Tom Nichols of the neighboring Nichols Ranch; and "honorary grandchildren" Deavon and Kayla Coleman, and Kristopher, Grace and Daniel Gibson. She was preceded in death by her birth father, Wilbur Emerson Thompson; her mother, Mary Higgins Thompson Jenkins; and her adopted father, Bruce Talman Jenkins. A person of great influence in her life whom she considered to be a "second mother" was Aunt Dorothy Jenkins Ross who was born and died on Jenkins Farms at the age of 99. Bruce, Raymond and Dorothy were the children of Clarence Wilmot Jenkins and Minnie Braithwaite Jenkins who founded Jenkins Farms in 1910. The family would like to thank Hospice Sutter North and Kim Sturgell for their compassionate care of Jan in the last few weeks of her life. A Celebration of Life service will be held for the family at Jan's home in the near future. In lieu of flowers, the family would suggest donations to the American Cancer Society or Yuba City Hands of Hope.

Janice Jenkins Schmidl, 76, of Live Oak, CA passed away on October 20, 2020 at her residence. She was born in Yuba City on July 13, 1944 at the old Fremont Hospital on the SE corner of Plumas St. and Colusa Ave. She was delivered by her grandfather,... View Obituary & Service Information

The family of Janice Jenkins Schmidl created this Life Tributes page to make it easy to share your memories.

Send flowers to the Schmidl family.