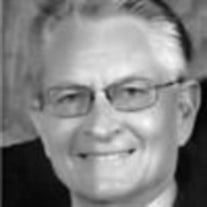 Jerry Bland, 80, passed away peacefully on the morning of November 13, 2020, after many years of courageously battling leukemia. Jerry was born on March 30, 1940, in De Queen, AR, to Frank and Alice Bland. He grew up in El Centro, CA, where he met Marty Mordah when they were in grade school. Jerry and Marty married on June 23, 1961, in El Centro and moved to Yuba City where he began his 40 year career with Caltrans. Jerry and Marty raised three daughters in Yuba City, Lori, Lisa and Leslee. After his retirement from Caltrans in 2002, Jerry filled his retirement years with traveling around the country, proudly visiting all 50 states, camping, cutting wood, building campfires, enjoying family get-togethers and honing his handyman skills. He beautifully repaired, remodeled or retiled many homes of friends and family. Jerry had a tool for everything. If he didn't have it, he would make one. We lovingly call it "Jerry-rigging." Jerry was a member of the Church of Christ since boyhood. He grew into a preacher, singer, song leader, teacher and Elder. Jerry's faith was the foundation of his life. He will be deeply missed by the congregation at Twin Cities Church of Christ. Jerry is preceded in death by his parents, Frank Bland and Alice Carroll Bland. He is survived by his beloved wife of 59 years, Marty Bland; by his three daughters and sons-in-law, Lori and Wayne Dutra, Lisa and Dave McCaslin, and Leslee and Brian Bushnell; by his two grandsons, Tyler and Brody Bushnell; by his brother and sister-in-law, Tony and Sherry Bland; and by his nieces and nephews, close friends and his Church family. Due to COVID-19 concerns, there will be no formal service at this time. But we will celebrate Jerry's wonderful life at a later date. "Precious in the sight of the Lord is the death of his faithful servants." Psalm 116:15. While we mourn our loss, we rejoice knowing he has finally received his reward.

Jerry Bland, 80, passed away peacefully on the morning of November 13, 2020, after many years of courageously battling leukemia. Jerry was born on March 30, 1940, in De Queen, AR, to Frank and Alice Bland. He grew up in El Centro, CA, where... View Obituary & Service Information

The family of Jerry Bland created this Life Tributes page to make it easy to share your memories.

Jerry Bland, 80, passed away peacefully on the morning of November...

Send flowers to the Bland family.