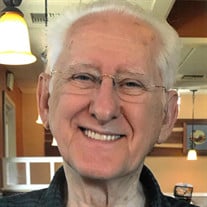 Dr. Jerry Donald Stroup of Yuba City, passed away on August 15, 2020 at Adventist Health/Rideout Hospital. He was born on August 5, 1939 in Sapulpa, Oklahoma to Ralph and Juanita Stroup. Jerry is survived by his wife Barbara of Yuba City, and 6 children, Elizabeth and Charles Tattershall of Barnett, MO, Deborah Winter of Jefferson City, Mark Stroup of Eldon, MO, Timothy and Robyn Stroup of Lancaster, CA. Matthew and Christal Stroup of Lancaster , CA. and Miriam and Matt Thompson of Lincoln, CA. Four step-children, Arleen Bradley of Artesia, New Mexico, Brenton and Angie Miles of Sutter, CA. Darrin Miles of Yuba City, CA., and Jason and Cinnamon Miles of Auburn, WA. Jerry was also the proud grandfather of 34 grandchildren and 25 greatgrandchildren. Jerry is also survived by a brother and sister-inlaw, David and Mary Lou Stroup who live in Sapulpa and a sister and brother-in-law, Joy Gayle and Terri Williams of Sapulpa. He has three nephews and one niece, 8 great nieces and nephews, and one great great niece. At the age of 15,Jerry was called into full time ministry at youth camp and immediately began ministering in local jails and nursing homes in Sapulpa as a gifted pianist. After graduating high school, he entered into full time ministry with the Assemblies of God. Meeting his sweetheart Karen Frazier at Central Bible College, they married and pastored their first church together. Feeling the need to complete his education Jerry went back to school and graduated with a Bachelor's degree. He then began pastoring throughout the Midwest in Assembly of God Churches. In 1969 Jerry was appointed by the General Council of the Assemblies of God to serve as the National Children's Director. For the next four years Jerry and his family traveled to various states speaking and conducting Children's Crusades and summer camps. This was a family affair as Jerry's wife Karen made puppets and flannel boards to use in the ministry, their children also participated and had wonderful summer trips during this period. Throughout his ministry Jerry continued his education completing his Masters Degree and his Doctorate in Ministry at Oral Roberts University in Tulsa, OK. In 1990 Jerry and his family moved to Grass Valley, California where he was called to minister to the community and not just a local church. Jerry planted a church in Grass Valley and after several years merged with the Assembly of God Church and shortly became the Senior pastor of Christian Life Center. It was during his ministry in Grass Valley Jerry's wife Karen of 37 years died of cancer. Jerry became a Chaplin and also was active in the Ministerial Association. During this pastorate Jerry married his second wife, Wanda Pringsing, who ministered by his side for approximately 8 years before dying of cancer. While in Grass Valley Jerry began teaching Bible classes at Trinity Bible College in Sacramento, and continued until 2018. In 2008, Dr. Stroup and Barbara Miles married, resigned as Senior Pastors of Christian Life Center and began a season of overseas evangelistic meetings partnering with Rev. Dave and Sharon Iverson, longtime friends from Bible School. They ministered in the Philippines , in numerous Central America countries, India, Argentina, and Macedonia. In 2015 Jerry and Barbara went on their last mission trip to Zambia, South Africa, with Jason and Cinnamon Miles, where they ministered to women and children who are HIV positive, teaching the Zambian women how to sew and providing basic needs to enable the children to attend school. In the last 5 years, Jerry and Barbara served as coordinators of the Senior adult group, leading a Sunday morning bible class and weekly prayer meeting at Calvary Christian Center. Throughout all of Jerry's ministry his greatest attribute was his love for his Savior, his family and all those God allowed him to touch. If he met you, you were placed on his prayer list and assured that he prayed for you daily, which he did. Jerry was an encourager and left a very large footprint to be filled! He will be greatly missed by those who knew and loved him. Due to Covid19 restrictions a private Celebration of Life is being planned. In lieu of gifts, Jerry's family request that you consider donating to the Sew Power Building Project in Zambia, https://sewpowerful.org/pages/donate. If you would like to livestream the service, there is a link on Jerry's Facebook page. Services are Friday, August 28. 2020 at 10:00 A.M.

Dr. Jerry Donald Stroup of Yuba City, passed away on August 15, 2020 at Adventist Health/Rideout Hospital. He was born on August 5, 1939 in Sapulpa, Oklahoma to Ralph and Juanita Stroup. Jerry is survived by his wife Barbara of Yuba City, and... View Obituary & Service Information

The family of Dr. Jerry Donald Stroup created this Life Tributes page to make it easy to share your memories.

Send flowers to the Stroup family.