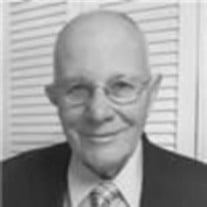 Jim Buchan of Yuba City, California, died with his family at his side on Friday, April 3, 2020. The youngest and last remaining of 5 siblings, Jim was born on May 3, 1933, in Oceanside, New York, to Herbert and Marie Buchan. After graduating from South Side High School, Jim enrolled at Cornell University, graduating with a bachelor's degree in political science in 1954. While at Cornell he was a member of Sigma Nu fraternity, the lacrosse team, and manager of the track and field team that toured Europe. Like his father before him, Jim began a long military career of more than 20 years in the Army, Army Reserve, and Army National Guard where he graduated from Army Ranger School (1960), graduated from the US Army War College, traveled the world, and ascended to the rank of Lieutenant Colonel. In 1959, he enrolled at UC Berkeley to continue his studies and was excited to attend a school known for its championship caliber teams in basketball, baseball, and football. Jim obtained a bachelor's degree in political science (1961) and a master's in business administration (1963). While at UC Berkeley, he met and married Rebecca Tsung-Ying Huang on June 14, 1961. Jim and Rebecca had two sons, Bill and James, while still completing his studies at UC Berkeley. In 1968, Jim received the career opportunity he had been looking for, a full-time faculty position in computer science and mathematics at Yuba Community College. The entire family moved to Yuba City, and Jim began his new career on the faculty, leading the effort to develop a new computer science curriculum at Yuba College. To further advance is knowledge in computer science, Jim obtained a master's degree in computer science at Chico State University in 1977. While at Yuba College, he met Joan Margret Harman. They were married on May 29, 1978, and remained married until Jim passed away. They were companions and best friends for life. He loved teaching and working at Yuba College, where he enjoyed a long career, represented the Teacher's Union, and served on the Yuba College Board of Trustees. Jim was also a long-time member of Yuba City Rotary Club, where he participated in and led many services projects such as blanket drives, eye glass drives, and drives to eradicate polio. Those who knew Jim know that he was an avid football fan, first with the Oakland Raiders (until they moved) and then with the San Francisco 49ers. But his true sports passion was for CAL football, where the family had season tickets for 37 years since 1972 celebrating each home game with a tailgate party. Jim loved tennis, running, and skiing. Joan and Jim celebrated many special occasions together with friends and family, often with a Ramos Fizz. Jim is survived by his wife, Joan; sons, Bill and James; Bill's wife, Eva; step-son, Bud Harman; and Bud's wife, Pris.

Jim Buchan of Yuba City, California, died with his family at his side on Friday, April 3, 2020. The youngest and last remaining of 5 siblings, Jim was born on May 3, 1933, in Oceanside, New York, to Herbert and Marie Buchan. After graduating... View Obituary & Service Information

The family of Jim Buchan created this Life Tributes page to make it easy to share your memories.

Jim Buchan of Yuba City, California, died with his family at...

Send flowers to the Buchan family.