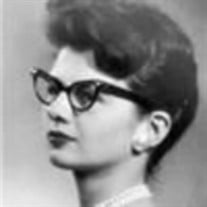 Joan Frances (Knoedel) Stone, born to Edwin and Irene Knoedel of Iowa City, Iowa, on the 16th June, 1935, passed into the Kingdom of God on the 7th of January, 2021, at the age of 85, in Yuba City, California. Her final hours were spent surrounded by her loving family, including her daughter Lori, son Mike, and her much beloved grandson, Dakota. Joan was born in Iowa City, Iowa, home of the University of Iowa Hawkeyes. Her formative years coincided with World War II, and like many kids, our mom pitched into the war effort, collecting scrap metal and other essential items. She began working at the age of twelve, as a dietary aid at the local Mercy Medical Center. In High School, she was a popular student who occupied many student leadership positions and was a busy student volunteer. Her musical talents were apparent when she played the pipe organ at St. Mary's Cathedral, and she continued her love of music her entire life. We fondly remember our mother playing the organ and singing carols at Christmastime when we were children. After High School, she entered the Nursing profession, earning her B.S.N. in 1955, immediately after which she became a clinical instructor. Her career lasted over 50 years including multiple decades as a Supervisor of Nursing at Rideout Memorial Hospital. She loved to work so much that after retirement from Rideout, she went back to work for Sutter-Yuba Behavioral Health for another five years. Throughout her life, Joan enjoyed many activities, but her real joy came from her friends and family, especially her grandson, Dakota. She loved to travel and traveled extensively when she could. Her favorite trips, however, were to Hawaii with best friends. She was loved by everyone, but the respect she received was due to her generosity, her rectitude, and her egalitarian spirit. We could always bring our friends over for Thanksgiving dinner even though our mom was a very private person because she never wanted anyone to be alone on the holidays. Our mom had a wonderful sense of humor which will be missed by all who knew her. In her later years, she often cooked for the homeless when St. Isidore Church would host the REST program. Her physical presence will be missed, but we know she is always with us. Our mom was always there for us and for that we are eternally grateful. Joan is survived by her son, Mike; daughter, Lori; grandson, Dakota; her younger brother, Dick Knoedel (Marva Abel) of Iowa; and younger sister, Linda Churches of Colorado; as well as many nieces, nephews and cousins. She is preceded in death by both parents, Edwin and Irene Knoedel; her younger brother, David Knoedel; and an infant sister. Donations can be made to St. Vincent De Paul Society. Funeral arrangements are under the direction of Ullrey Memorial Chapel with interment at Sutter Cemetery.

Joan Frances (Knoedel) Stone, born to Edwin and Irene Knoedel of Iowa City, Iowa, on the 16th June, 1935, passed into the Kingdom of God on the 7th of January, 2021, at the age of 85, in Yuba City, California. Her final hours were spent surrounded... View Obituary & Service Information

The family of Joan Frances (Knoedel) Stone created this Life Tributes page to make it easy to share your memories.

Send flowers to the Stone family.