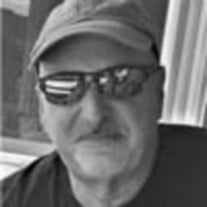 When people speak about cancer, they use the words "battle" or "courage", and they do so for a reason. John W. Tuscano Jr., lost his life at 11:00am on February 24, 2021. He was born on August 21, 1946, and lived in Yuba City his entire life. He lost his battle with pancreatic cancer with more courage and dignity than anyone thought humanly possible. He never quit fighting or searching for anything that would increase the time left for him. John had too much to stay for as he would tell you. He was an artist and a visionary that was unique in our time. He saw the beauty in hard work, and built the world around him using the skills he'd learned, but skills alone did not create the places John considered his greatest accomplishments. He would tell you that work ethic and organization alone were the key, but would never admit it was what he saw in his heart that pushed him every day. He absolutely loved to take you on a tour of his home, but was just as eager to walk through your home and talk about the possibilities. While John was honored to be in charge of the many things he created, he was just as motivated in taking part in projects like the Sutter Theater, and the city water tower. Yuba City was a primary focus in his life, but it stood firmly behind his family. Nothing made him more happy than being a Tuscano and Sunday dinners. He was a proud Italian man who loved to cook, create art, travel, and for those who knew him well, he always loved a good water feature, and oranges from his tree. John loved his beautiful family, and was a proud husband who found his own "1723" with his Nancy, for over twenty-seven years. He was a loving brother, father, grandfather, and great-grandfather, who gave tough lessons, demanded respect, and carried high expectations. He wished the best for the people he loved. Sometimes that meant a dose of reality while other times it meant he would stand up for them, and for what was right. As a man of principle John lived every day to set an example. His example in life is one that projects hard work with rewards that stand long after you're gone through the places you visit, the people you meet, and the family you cherish. John Tuscano did all these things, and he did them well. His legacy lives in the hearts of those he loved, and we will all be forever grateful. Survived by his loving wife of 27 years, Nancy Tuscano; sister, Donna Cummings, and family Kari, (Michael), Dominic and Dane LeBlanc; brother, Ron Tuscano; sister, Julie Garcia, and family, (Frank), Chanel, and Chloe; brother, Joseph Tuscano, and family (Natasha), Eden, Emily, Nicholas, and Gia; daughter, Lis Johnson, and family, (Chris), Sadie, and Jace; son, Anthony Sunseri; son, Christopher Tuscano and family, (Natasha), Giovanni, and Vinnie; son, Richard McManus, and family, (Cozette), and Maci; son, Robert McManus, and family, Tara, Anna, and great-grandson Bradon. Preceded in death by his parents, John and Magaret Tuscano; and brother-in-law, Richard Cummings. He graduated from Yuba City High school in 1964. In 1968, he graduated from Chico State University and began his work with the Yuba County Probation Department where he attained the rank of Supervisor. He left to pursue his own business interest in Tuscano Enterprises in 1986. John and Nancy married at Freemark Abby winery in St. Helena, California, November 12th, 1994. John was the owner and sole proprietor of Tuscano Enterprises and Bi County Electric. He co-founded the SPAA non profit organization to restore the Sutter Theater with good friend Russ Clark. John's projects were mostly commercial and focused on downtown Plumas street developments including The City Cafe, The city water tower, and received the key to the city for restoring the Littlejohn-Madden House. Graveside services will be held at Sutter Cemetery at 2pm, March 5th, 2021. A Celebration of Life will be held at a later date. In lieu of flower donations the family asks that donations be made to the "UC Davis Regents, Dr. Joseph Tuscano Cancer Research Foundation". 2279 45th Street, Sacramento, CA 95817 https://give.ucdavis.edu/Donate/YourGift/ HOTJ401

The family of John W. Tuscano Jr. created this Life Tributes page to make it easy to share your memories.

When people speak about cancer, they use the words &quot;battle&quot; or...

Send flowers to the Tuscano family.