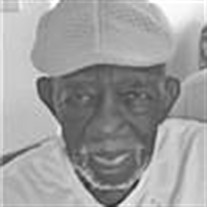 Jorden Lewis (Papa Lou), 91, of Yuba City, CA. went to be with the Lord on June 29, 2019. The Celebration of Life will be held at Marysville Youth & Civic Center, 1830 B Street, Marysville, CA. For those who knew Jorden; Fellowship will be July 10, 2019 between 7:00 pm & 10:00 pm. Military Honors will be promptly at 7:00 pm. Jorden Lewis was born in St Joseph, Louisiana on April 7, 1928. Jorden retired from Travis, AFB, CA. and he proudly, faithfully, and honorably served in the military for 30 years. His most prestigious duty in the military was working with the SR-71 carrying the responsibility of suiting up the fighter pilots. He served in Iceland, Germany, Vietnam, and Korea. During his tour in Korea November 1, 1958 to June 20, 1959 he received outstanding performance from the Headquarters 10th Fighter Group for demonstrating a high degree of ingenuity and initiative in carrying out his duties, which contributed to the safety flight. His contributions not only reflected a great credit to him and the United States Air Force, he also received a letter of appreciation and gratitude for exemplary service. Jorden also ran a business as a co-owner of a restaurant in Marysville called Bob & Lou's Smorgasbord in the late 70's. He also co-owned a cleaning business at Beale AFB, CA (Josie's Cleaning Service) with his wife Josefina for 20 years. Jorden had an incredible ability to reach out to people in a deep and positive way. He led by an extraordinary example. He showed his caring ways with gently turning a negative into positive feedback. He always spoke about the best in others and he always was willing to help out when needed. He was a man of faith and he was deeply loved and well respected by many of his friends, family and neighbors. Jorden was married to Josefina Ayala Lewis on March 17, 1996. They were married 23 years. Jorden is survived by his wife Josefina, sons, Andre and Tony Lewis and daughter, Wanda Holland. Also, many aunts, uncles, cousins, brothers, sisters, nieces, nephews, grandchildren and great grandchildren. Jorden is proceeded in death by his father, David Lewis Jr., mother, Mary Ella Thomas; son, Rodney Lewis; grandfather, Robert Thomas Lewis and grandmother, Mariah Lewis. Extended Family members included, Mary Tapp/Bush, William and Helen Tapp, Robert and Joanne Tapp, Lloyd and Chre Tapp, Nora Tapp-Sprague, and Christopher Davis and Mike Bernenato. In lieu of flowers donations may be made to the American Cancer Society. The Family wishes to deeply thank long-time friend Randy Deas for all his services and all those who have shown their constant support and efforts throughout this difficult time.

Jorden Lewis (Papa Lou), 91, of Yuba City, CA. went to be with the Lord on June 29, 2019. The Celebration of Life will be held at Marysville Youth & Civic Center, 1830 B Street, Marysville, CA. For those who knew Jorden; Fellowship will be July... View Obituary & Service Information

The family of Jorden (Papa Lou) Lewis created this Life Tributes page to make it easy to share your memories.

Send flowers to the Lewis family.