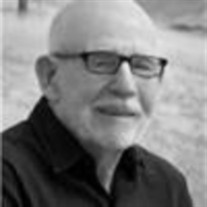 Joseph Morehead of Sutter, CA passed away peacefully at home on August 23rd, 2021. Joe was 91 years old. He was born to Paul S. and Margaret (Gordon) Morehead on January 7, 1930 on the family farm where he built his home, his business and raised his family. It was a place he loved dearly. Joe was survived by his wife of 62 years, Brenda Morehead. They were married on February 14, 1959 (Valentine's Day). They had 4 sons. Darren Morehead (Coleen), Tod Morehead (Gary Miller), Joe Morehead (Julie), and Marty Morehead (Susie). Joe had 6 grandchildren and 4 great-grandchildren. Joe graduated from Sutter Union High School in 1949 where he was a football star for the Huskies. He served in the United States Army and was stationed in Big Delta, Alaska servicing and testing equipment. When he came home, he drove lowbed truck for his cousin, Lee Platter and helped his father raise rice until he started his own business. In 1957, Joe founded Butte Rock and Gravel on the family farm where he was raised. He grew a successful business until his sons took it over in 1991. Joe was very proud whenever he saw a red and white truck going down the highway. Joe and Brenda kept busy when he retired. They traveled around the world and in their RV throughout the US, Canada, and Mexico with friends. Joe (and his dog Maxi) hiked the Pacific Crest Trail from Mexico to the Oregon border in his late 60's and finished when he was 71. He enjoyed hiking with his wife, sons, grandchildren, and friends along the many segments of the trail. He enjoyed annual hunting trips in Craig, Colorado and could always be found at the Waffle House for Friday Morning Farmers Breakfasts (at 6:00 am) and Tuesday night Dinners with longtime friends. Joe was also active in the community. He often attended Sutter High Sporting Events and carved turkey at Sutter Methodist Church every holiday season. He helped build the High School Tennis Courts and recently rebuilt the Morehead Family Community Pool at the Sutter Youth Organization. He enjoyed working on those projects and giving back to the community where he grew up. Joe touched many in the community and will be fondly remembered by all. There will be a viewing on Monday, August 30th from 4:00pm – 7:00pm at Ullrey Memorial Chapel, 817 Almond St, Yuba City. Graveside Services will be held on Tuesday, August 31st at 10:00am at Sutter Cemetery. A Celebration of Life will be scheduled at a later date. In Lieu of Flowers, please consider donating to The Morehead Family Pool at the Sutter Youth Organization. Donations can be mailed to: PO Box 231, Sutter, CA 95982

Joseph Morehead of Sutter, CA passed away peacefully at home on August 23rd, 2021. Joe was 91 years old. He was born to Paul S. and Margaret (Gordon) Morehead on January 7, 1930 on the family farm where he built his home, his business and raised... View Obituary & Service Information

The family of Joseph Morehead created this Life Tributes page to make it easy to share your memories.

Joseph Morehead of Sutter, CA passed away peacefully at home...

Send flowers to the Morehead family.