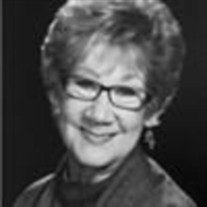 Judith Anne Arnold, went to be with the Lord on March 4th, 2022. She was 74 years old. Born March 8th, 1947, in Bakersfield, California, Judy grew up in Taft, graduating from Taft High School in 1965. After attending junior college at Taft JC, she transferred with her twin sister Jan to UC Santa Barbara, then later to Long Beach State. While in Southern California, she met Jeff Arnold, her husband of 53 years. After a short stint living in So Cal, Judy and Jeff moved to Marysville, and ultimately Yuba City, in 1973. It was around this time that she began her 40+ year career working for Agricultural Advisors until she retired in 2014. Judy was preceded in death recently by her husband, Jeff, on January 23, 2022. She was also preceded in death by her parents, Eugene and Marjorie Clausen. She is survived by her son, Joel (Candace); and daughter, Janay (Tony). She was blessed with three grandchildren: Morgan, Jayden and Tanner, and grand-dog Chip. Other members of her family include twin-sister, Jan Gary (Bill); sister, Cindy Norton (John); nephews, Brent Gary (Cheryl), Brannen Gary (Barbie); and niece, Heather Nickell (Brent); as well as numerous grand-nieces and nephews. Judy was a devout Christian, who was a member Grace Baptist Church for over 45-years. It was there she found her creative side by decorating the church for holidays, special occasions or just because. Some of her favorite phrases included "How Cool!" when describing something great, or a 49er win, and "My Darlings" and "Angel Face" when referring to her grandkids. She had a close circle of friends, both inside and outside of church; Becki, Elaine, Janet, Connie, Sally, Dawn, Irene, Bonnie and others. Sporting her love of jewelry and shopping, she was a stylish woman, often color coordinated and accessorized with "bling". She loved to travel; for her family, softball games and performances for the grandkids, and for herself, Lake Almanor, Santa Cruz, and Hawaii. While she battled with leukemia for over 20-years, she always did it with style, faith, and a smile on her face. She had a huge heart, was a loving mother and grandmother, loved the Lord, and saw the good in everyone. A co-Celebration of Life for Judy and Jeff, will be held Saturday, March 12th, 2022, at 2pm, at Grace Baptist Church, 1980 S Walton Avenue, Yuba City.

Judith Anne Arnold, went to be with the Lord on March 4th, 2022. She was 74 years old. Born March 8th, 1947, in Bakersfield, California, Judy grew up in Taft, graduating from Taft High School in 1965. After attending junior college at Taft JC,... View Obituary & Service Information

The family of Judith Anne Arnold created this Life Tributes page to make it easy to share your memories.

Send flowers to the Arnold family.