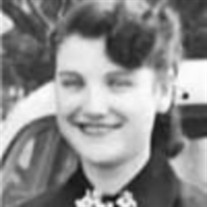 June Marquette, 88, of Sutter, CA, passed away on September 25, 2021, surrounded by the love of her family. She was born June 24, 1933, in Sutherlin, Oregon, to Paul and Inez Cratty. June is survived by her husband of 67 years, Dick Marquette; sons, Bob Marquette; Mike (Rhonda) Marquette; David (Mary) Marquette; 5 grandchildren: Melissa, Heather, Jeffrey, Ariel and Thomas; 4 great-grandchildren: Riley, Elijah, Kylie and Ava. June met and married her husband Dick while they were both employed at the Yuba County Hospital. Once married, June became a proud homemaker, always active in the lives of her three sons growing up. She loved family trips, picnicking in the Feather River Canyon and Table Top Mountain and dinner outings on Friday or Saturday nights. June traveled to England and Scotland looking into her family roots. June's most cherished treasure was her family. There will be a Celebration of Life for June on Saturday, October 2, 2021, at the home of her son, Mike, in Sutter. "God gave us memories so we would have roses in December." A Love Story, by Dick Marquette My own true love, June Wilda Cratty, came upon this earth during The Great Depression. The year was 1933. June was born in the tiny logging town of Sutherlin, Oregon, near Roseburg. Her parents Paul and Inez Cratty were employed in the logging industry, where her mother Inez was a cook and little June was her helper. I met and married June while we were both employed at the Yuba County Hospital on 14th Street. We often met after work in the old Motor Park on 14th Street and we would picnic and watch the little train as it circled the park. I had just returned from the Korean War and was a patient in the U.S. Naval Hospital at Oak Knoll, California. June wanted a traditional marriage then, where mom would be there for the children when they returned home from school, she was a wonderful mother for our three boys and was loved by them deeply. June loved the family together time when we ate out on Friday nights at local restaurants such as The Uriz Hotel, Mama's Place, The Beefeater at the Hotel Marysville or a special treat at Steve's Pizza House. June loved her weekends with our family, the quaint little Gold Rush towns with exotic restaurants, antique shops where June and I bought each other little gifts and enjoyed the unknown little cafes tucked away in our old mining towns. As a special treat one Easter, June had arranged a train ride on the California Zephyr, up the Feather River Canyon. Our family boarded the train in Marysville and mom was given a large corsage of California wild flowers and chocolate bunnies for the children. At the base of the big waterfall that overlooked the railroad I had taken it upon myself to play "Amazing Grace" on the bagpipes in full highland attire. The train slowed to a crawl and tooted me a whistle while the folks onboard cheered. Later that day our family ate a special Easter dinner in the diner and nothing could be finer with white linens, fresh carnations, fresh Feather River trout and silver service; it was truly a magnificent dinner and a day we would hold dear to our hearts. June and I thought it fun to trace our family tree and she was of descent of Irish and Scottish clans Revolutionary War Soldiers including Confederate General Jubal Early CSA. Also her family helped as a station for the famed Underground Railroad for helping slaves to escape to Canada. On a lighter note some had told me that my family tree was not worthy of research and for that I could understand. One of the most precious times of one's life are to visit the scenes of their family roots. June's family had meticulous records of those family villages in the pastured countryside of Ireland, Scotland and Northern England. We had spent three weeks with a couple in York, England, in exchange for three weeks with us in the states. June was introduced to the Lord Mayor of York, England and we visited old graveyards and ancient battlefields. We both were of descent of The Mayflowers first passengers and it was a splendid visit with haunting thatched roofed cottages in whose streets the sheep were allowed to roam freely. It was a step back in time. When I finished this article it had stopped raining and we saw a beautiful double rainbow. Daughter-in-law Rhonda said it was Gods promise that everything will be alright and I thought of the old song, "You are my sunshine, my only sunshine. you make me happy when days are gray. You'll never know dear how much I love you. Please don't take my sunshine away."

June Marquette, 88, of Sutter, CA, passed away on September 25, 2021, surrounded by the love of her family. She was born June 24, 1933, in Sutherlin, Oregon, to Paul and Inez Cratty. June is survived by her husband of 67 years, Dick Marquette;... View Obituary & Service Information

The family of June Marquette created this Life Tributes page to make it easy to share your memories.

Send flowers to the Marquette family.