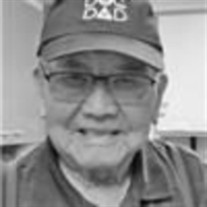 Early morning on July 16, 2021, Ken Tanabe peacefully slipped away. He was at home in the house that he helped build. In the days prior, he was able to visit and say goodbye to dear friends and his beloved family. Ken was born on March 31, 1925 to parents, Yone and Goroku. He attended Barry Elementary School and Yuba City High School until interned at Amache, Colorado where he completed his senior year. He was drafted, trained at Fort Hood, Texas, and deployed in 1944. Ken was a member of the 100th Battalion/ 442 Regimental Combat Team that rescued the Lost Battalion. After the war, he returned to Yuba City to work alongside his parents. Then he met Ida Yoshiko Yokotobi working at the soda fountain at Yo's Pool Hall. They were married in Reno on September 25, 1947. His venture into farming began in 1948, in Gridley where Yoshiko's brother, Kay, farmed. Their daughter, Kandace, was an infant when they moved. Their son, Dwayne, was born 5 years later. Ken farmed peaches, prunes and eventually walnuts. He also worked for the Butte County Fairgrounds for 17 1/2 years and proudly admits to never missing a day of work. That work ethic is only one facet of his fine character. Honest, loyal, modest, kind, loving, accepting and funny are among other attributes this man possessed. I've never met anyone who didn't respect and truly like him. Ken and Yoshiko were proud grandparents to Bethany (Brandon), Renee (Justin), and Jacob (Tiffany). They particularly enjoyed attending basketball and softball games. In fact, they were known as grandpa and grandma to all the players. He was blessed to be a great-grandpa to Mason, Caleb (Bethany), Rylan (Renee), Braelynn, and Ethan (Jacob). So fortunate was he to have time to enjoy them. Ken was an active member of the VFW and Gridley Lions Club always willing to help but never sought to be publicly recognized for his service. He received the Melvin Jones Fellow award for dedicated humanitarian services by the International Lions Club Foundation. In 2012, he was presented a Congressional Medal of Honor by Wally Herger. The Gridley Monday Quilters honored him with a Quilt of Valor in a 2016 Veterans Day Ceremony. He is preceded in death by his wife of 65 years, Yoshiko; parents Yone and Goroku; and two brothers, John and Paul. To honor his request, there will be no public service. Donations in his name can be made to Advanced Hospice, 855 Harter Parkway, Suite 380, Yuba City, CA 95993 or to your favorite charity. Lift a glass, eat ice cream, try an act of kindness and remember his words "No big deal...it's okay."

Early morning on July 16, 2021, Ken Tanabe peacefully slipped away. He was at home in the house that he helped build. In the days prior, he was able to visit and say goodbye to dear friends and his beloved family. Ken was born on March 31, 1925... View Obituary & Service Information

The family of Kenneth Teruchi Tanabe created this Life Tributes page to make it easy to share your memories.

Send flowers to the Tanabe family.