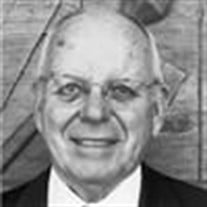 Larry Leroy Hecht passed away peacefully on September 2, 2019, in Marysville, California. He was born August 2, 1933, in Toledo, Ohio to Harry and Dorothy Hecht. He was active in the Boy Scouts and achieved the rank of Eagle Scout as well as being inducted into the Order of the Arrow. One of his fondest childhood memories was traveling by bus from Ohio to New Mexico to visit Philmont Scout Ranch in 1946. He graduated from Libby High School in 1950 and then joined the Carpenter's Union. He enlisted in the Army in 1953 and was a paratrooper in the 11th Airborne Division. His military service was one of his proudest accomplishments. He had many different careers throughout his lifetime including working as security at the Plaza Hotel and Casino in Las Vegas, directing redevelopment agencies in Toledo, Chicago, Henderson, Nevada and San Jose, as well as being a self-employed real estate agent and broker. He served in many community organizations such as the Lions Club, American Legion, Boy Scouts and YMCA. Larry was an adventurous individual who would try just about anything. He was a rescue scuba diver for the Toledo SubMariners, earned his private pilot's license and loved to travel, visiting locations such as Tahiti, Italy and Hong Kong. He enjoyed sharing experiences with his children such as canoeing through the Canadian wilderness and being awoken to the howls of coyotes while camping at Grant Ranch. Larry is loved and will be greatly missed by his wife, Rafat; children: Amira (Troy) Lindbloom, Kris (Vanessa) Hecht, Mahtab (David) Gold and Matash (Steve) White; and his beloved grandchildren; and great-grandson. Interment will be Monday, September 16, 2019, 10:00 AM at the Sacramento Valley National Cemetery. A public Celebration of Life will be held that afternoon from 2-4pm at the Veteran's Memorial Center located at 211 17th St., Marysville, CA 95901.

Larry Leroy Hecht passed away peacefully on September 2, 2019, in Marysville, California. He was born August 2, 1933, in Toledo, Ohio to Harry and Dorothy Hecht. He was active in the Boy Scouts and achieved the rank of Eagle Scout as well as... View Obituary & Service Information

The family of Larry Leroy Hecht created this Life Tributes page to make it easy to share your memories.

Send flowers to the Hecht family.