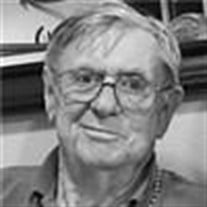 Larry Lavern Montna was born November 10, 1939, to Lavern (Nellie) Montna and Viola Duvall Montna at Rideout Hospital in Marysville, California. He passed away peacefully with his brother by his side on Sunday, February 16, 2020, at the age of 80 in Yuba City, California. Larry was a lifetime resident of Sutter County where he attended Barry School and played football, participated in Future Farmers of America, and graduated from Yuba City High School. Larry soon joined the Navy to see the world, but was stationed in San Jose, California, and never left that base during his duty. Larry married Norma Jean Jensen on November 16, 1959, in Reno, Nevada. They had nearly a 60-year marriage filled with love, laughter, tragedy, hard work, and community service. It's nearly impossible to talk about Larry without mentioning Norma. They truly lived their lives together. It was rare to see one without the other. Late October 1961, brought a precious son, Larry "Butchie" Montna, into their lives. Butchie was born with Down Syndrome. That set the course of community service for the rest of Larry and Norma's lives. They immediately engaged in and were actively involved in bringing local chapters of the Special Olympics to the Yuba-Sutter area along with others. 1977 was filled with tragedy when a drunk driver caused a major automobile collision killing Butchie and severely injuring Norma. Before the healing even began, Larry and Norma set out to find a way to honor the memory of Butchie and to help others afflicted with Down Syndrome and many other ailments. In 1979, Butchie's Pool was opened as a warm water, therapy pool for those with congenital disabilities. Larry was also instrumental in opening Value Village, a thrift store that benefited the disabled community as well. Butchie's Pool eventually evolved into serving anyone with any disability and touched so many more lives. Butchie's Pool and Value Village were community assets that served residents of Yuba-Sutter and beyond for many years. Larry was a long-time member of Kiwanis. He sat on countless Boards of Directors for Special Olympics, Gateway, Easter Seals, and many other foundations. Larry was awarded the prestigious Pedro Award from United Way in 1985, along with many other awards and recognitions throughout his life. His gift of service spilled over to the local government of Sutter County, as well. Larry Montna was a three-term sitting Sutter County Supervisor representing District 1. He was first elected in 1988, and served one term, and then, was re-elected for a second time in November of 2004, and served another two terms before retiring from government service but continued his community service. Throughout Larry's life, he selflessly gave of his time and his abilities. He was a master heavy equipment mechanic, a creative inventor of all things metal and welding, and a never tiring local service club chef, fire-pit boss, and chief pancake maker. Larry worked at Tenco for many years in heavy construction and farming equipment repair. He and Norma later opened, Larry Montna Equipment Repair, and eventually that evolved into Muffler Master's. They sold their business and retired in 2014. Larry's hobbies were remote control airplanes, local race cars, and NASCAR. Larry is preceded in death by his son, Larry "Butchie" Montna; and his wife, Norma Montna. He is survived by his brother, Pete Montna (Vicki); nieces, Tiffani Montna Williams (David), Tierni Montna Martins (Gary); and great-great-nieces and nephews. A Celebration of Life will be held on Thursday, February 20, 2020, 2pm, at Ettl Hall (behind the Sutter County Museum) 1333 Butte House Road, Yuba City, CA, 95993. In lieu of flowers, please send donations in Memory of Larry Montna to Yuba Sutter Special Olympics, 1171 Phillips Road, Yuba City, 95991

Larry Lavern Montna was born November 10, 1939, to Lavern (Nellie) Montna and Viola Duvall Montna at Rideout Hospital in Marysville, California. He passed away peacefully with his brother by his side on Sunday, February 16, 2020, at the age... View Obituary & Service Information

The family of Larry Lavern Montna created this Life Tributes page to make it easy to share your memories.

Send flowers to the Montna family.