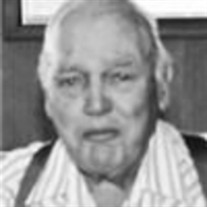 Lawrence Guy "Larry" Harris, of Meridian, California, passed away December 10, 2021, in Yuba City, California. He was 95 years, 2 months, and 4 days old. Larry was born October 6, 1926, in Wallowa, Oregon. He was a Civil Engineer and Walnut... View Obituary & Service Information

The family of Lawrence Guy "Larry" Harris created this Life Tributes page to make it easy to share your memories.

Send flowers to the Harris family.