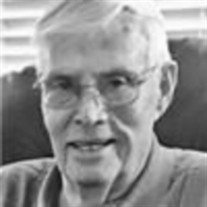 4/5/1934 - 4/3/2020 Lenzie Scoggins, age 85, a longtime resident of the Yuba Sutter area, passed away peacefully in his home on April 3, 2020, surrounded by his loving family. Lenzie was born in Keota, Oklahoma on April 5, 1934 to Delma and Charley Scoggins. The family, including his older brother, Avery, relocated to California in the early 1950's. Lenzie worked at the Feather Falls Lumber Mill near Oroville. It was here that he met his first love, Bonnie Terpening. Lenzie and Bonnie were married in 1955. He was drafted into the Army, stationed in Fort Hood, Texas. Their first son, Tim, was born in 1958. After his service, he and Bonnie returned to Oroville, where their second son, Mike, was born in 1960. A finish carpenter, Lenzie went to work for Melton and Melton Construction. A good family man, he coached his sons through Live Oak Little League and always enjoyed Sunday meals with family. Card games were usually played and home-made ice cream was often churned. Sadly, Bonnie passed away in February 1989. In 1991, he married the second love of his life, Ann Mackie. He made many new friendships and had many new adventures. He joined the Slow Trollers Fishing Club, Gold Country Bassers and the Plumas Lake Golf Club. He loved golfing with his boys and his buddies whenever he had the chance. Lenzie is survived by his loving wife, Ann. His two sons, Tim (Pauline) Scoggins, Mike (Michele) Scoggins, his stepson Charles Mackie, and his "Little" brother Avery (Jan) Scoggins He is also survived by five grandchildren: Justin (Ashle) Scoggins, Kristin (Julian) Gray, Andrew Scoggins, Jenna Scoggins, and Taylor Mackie. seven great grandchildren all residing in TN. In lieu of flowers the family requests donations be made to St. Jude's Research Hospital or Sutter Health/Care at Home (hospice). Private services will be held at Live Oak Cemetery. Arrangements are under the direction of Ullrey Memorial Chapel.

The family of Lenzie Scoggins created this Life Tributes page to make it easy to share your memories.

Send flowers to the Scoggins family.