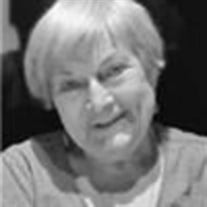 Lorraine passed away February 27th, 2021, at the age of 88, in Yuba City, California. She was born to Barbara and Lester Varnum in 1932, in Portland, Oregon. Lorraine and her brother George were raised by their mother in Minot, North Dakota, during the 30s and 40s. Times were challenging for the family during the depression and war years and Lorraine's mother moved the family often in Minot and worked many menial jobs. They had electricity but no indoor plumbing in some of the places they lived – but, through it all, they developed a strong work ethic and resiliency. Lorraine graduated from Minot High School in 1950 with experience working as a nurse's aide at the local hospital. After researching accredited hospitals with nurse training programs, Lorraine boarded a Greyhound bus just before her 18th birthday and left North Dakota, for Oakland, CA, to begin the nursing program at Kaiser Permanente, the only hospital that offered free tuition at the time along with room and board, free uniforms, books etc. Lorraine first worked as a nurse in the Bay Area, then in 1955, she flew to Oahu, and worked at Kapiolani Hospital in Honolulu. While in Hawaii she met her future husband Philip Poukish, an officer in the US Air Force stationed at Hickam Field. After their marriage in 1957, Lorraine took a break from nursing and spent the next 18 years raising 4 kids in 10 different cities and Air Force Bases until landing in Yuba City in 1975. Soon after, Lorraine started taking nursing refresher courses at Yuba College and rebooted her nursing career at Fremont Hospital in Yuba City, spending the next 17 years on a med surgery station as a charge nurse. After the arrival of grandchildren, Lorraine retired from nursing but did hospice volunteer work. Lorraine was an avid reader, she loved to sew, cross stitch, quilt, do crossword puzzles, watch late-night talk shows with her kids and could have been a Jeopardy! champion. Together, Lorraine and Phil enjoyed camping with their kids, travelling the world and later, RV'ing across the U.S. She was a member and volunteer at Yuba City First United Methodist Church. She met several good friends as a member of the Yuba Sutter Quilt Guild. Lorraine was preceded in death by her parents, and then her husband in 2014. Phil and Lorraine were married for 56 years. Lorraine is survived by her brother, George of Nipomo, CA; and 4 children, Laura Jones (Gene) of Marysville, Judy Robbins (Gary) of Winnemucca NV, David Poukish (Mindy) and Jack Poukish (Eileen) of Yuba City. Lorraine is also survived by 5 grandchildren: Hannah, Sophie, Charlie and Sammy Poukish and Amity Robbins. Lorraine was loved by many and will be greatly missed. There will be a private inurnment at Sutter Cemetery with her daughter Rev. Judy Robbins officiating. Please donate to Yuba City First United Methodist Church or Shriners Hospital for Children in memory of Lorraine.

Lorraine passed away February 27th, 2021, at the age of 88, in Yuba City, California. She was born to Barbara and Lester Varnum in 1932, in Portland, Oregon. Lorraine and her brother George were raised by their mother in Minot, North Dakota,... View Obituary & Service Information

The family of Lorraine Louise Poukish created this Life Tributes page to make it easy to share your memories.

Send flowers to the Poukish family.