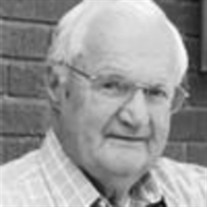 Louis W. Stanley, 84, of Yuba City, passed away on September 23, 2021, surrounded by family after a brief illness. Lou was born on January 19, 1937, to Theodore and Donna Stanley in Akron, Ohio. After relocating to Arizona, Lou graduated from Tucson High School. He joined the Navy and served as a 3rd Class Engineman from 1957-1961. After he was honorably discharged from the Navy, he began his career at Sears as a parts guy, kickstarting a 35 year career with the company. He ended his time with Sears as a Store Manager in San Luis Obispo. After retiring from Sears, Lou moved back to the Yuba City area and eventually bought Abbey Carpet. In 2011, Lou officially retired and spent his time caring for his wife, watching his grandsons play sports, and cheering on the Oakland A's! While working at Sears Lou met his loving wife, Dora. The two married November 10, 1961, and went on to have three children, Timothy Stanley, Kathryn Stanley Parker, and Jennifer Stanley Dove. Lou was a devoted husband and father. He loved his family more than anything. Lou and Dora were faithful members at Calvary Christian Center in Yuba City, he attended CCC for over 30 years and served on the board for many of those years. Anyone who knew Lou, knew that he was full of joy, was always smiling and he loved the Lord with all of his heart. Lou was preceded in death by his mother and father; sister, Alice; and son, Tim. He is survived by his wife, Dora; his children, Kathy Parker (Wayne) and Jenny Dove; grandchildren, Jordan Parker Pegany, Caleb Parker, Timothy Dove, Andrew Dove, and Rian Dove; and great-grandchildren, Azaiah Pegany, Kaiah Pegany, and Colt Parker; his sisters, Lillie and Garnet; and brother, Ted. Graveside Service will be held at Sutter Cemetery on Friday, September 29, 2021 at 10:00AM. Donations in honor of Lou may be made to Calvary Christian Center, 2620 Colusa Hwy, Yuba City, CA or to Autismspeaks.org.

Louis W. Stanley, 84, of Yuba City, passed away on September 23, 2021, surrounded by family after a brief illness. Lou was born on January 19, 1937, to Theodore and Donna Stanley in Akron, Ohio. After relocating to Arizona, Lou graduated from... View Obituary & Service Information

The family of Louis W. Stanley created this Life Tributes page to make it easy to share your memories.

Send flowers to the Stanley family.