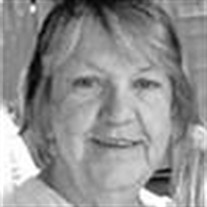 Marilyn" Kathy" Brown, 70, passed away peacefully at her home with her family by her side on March 13, 2019. Kathy was born in Bakersfield, California on May 24, 1948 to Garvey Cortez and Jewell Fleda Douglas, they then raised her and her 12 siblings in Olivehurst, California. At the age of 25 she married Robert L. Brown on September 3, 1973 in Reno, Nevada, their family grew by the addition of 3 children, Robin K. Brown, Preston D. Brown, Wesley D. Brown. Over the years Kathy had many occupations, but her favorite was being a Mother, and Grandmother. It did not matter who you were or where you came from, she accepted everyone into her already large family, of which, she held close to her heart, and was very proud of. Kathy was very creative and her hobbies included crafts, sewing, and talking on the phone. Kathy loved telling stories and talking, she always added her own twist and touch to everything. Kathy is survived by her daughter Robin K. Brown, son-in-law Cesar Garcia, five grandchildren, Nicholas I.C. Cowee, Gracie, Emma, Eva, and Cortez D. Garcia; son Wesley D. Brown and daughter-in-law Stephanie Brown; sister-in-law Isabel Brown of Fortuna, CA; two brothers-in-law Larry Fultz of Olivehurst, CA and Harold Maddox of Willits, CA, and numerous nieces and nephews spread out all over the country. Kathy is preceded in death by her son Preston D. Brown; husband Robert L. Brown; her parents Garvey Cortez and Jewell Fleda Douglas; 4 brothers, Charles Douglas, Edward Douglas, Jerry R. Douglas and Kenneth O. Douglas and 8 sisters, Helen Hayes, Effie Hearon, Freda Keffer, Cleo (Bug) Maddox, Vickie Fultz, Nay Smith, Fay Burks and Larue Arriola. Viewing will be on Friday, March 29, 2019 at Ullrey Memorial Chapel from 3:00pm to 5:00pm.

Marilyn" Kathy" Brown, 70, passed away peacefully at her home with her family by her side on March 13, 2019. Kathy was born in Bakersfield, California on May 24, 1948 to Garvey Cortez and Jewell Fleda Douglas, they then raised her and her 12... View Obituary & Service Information

The family of Marilyn "Kathy" Brown created this Life Tributes page to make it easy to share your memories.

Send flowers to the Brown family.