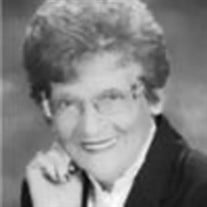 September 28, 1929 - November 28, 2020 It is with great sorrow that we announce that 2020 was Mary Ann's last harvest. She was the last child of 12 children born to Joe and Ida Cambra. Unfortunately, her mother died in 1930 when she was just... View Obituary & Service Information

The family of Mary Ann "Cambra" Woods created this Life Tributes page to make it easy to share your memories.

Send flowers to the Woods family.